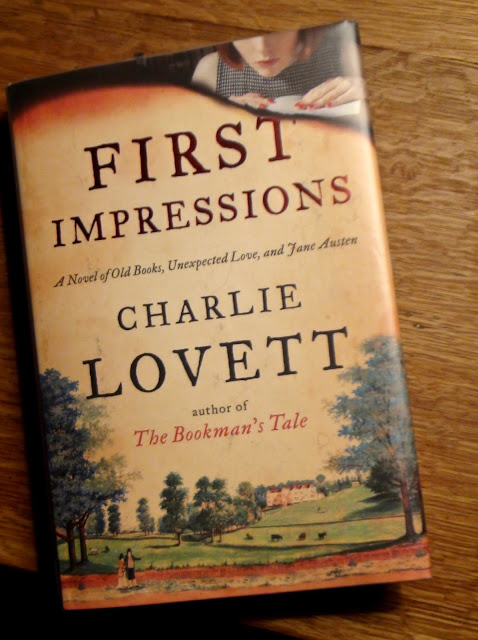 The theme for the McBride Library Book Club last month was “Books about Books”.   Here is a review of the books I read:

When I first heard that the Book Club theme was "Books About Books" I was less than enthusiastic and didn't find any of the suggested books very appealing, so I went looking on the shelves and found two by the same author, that I really enjoyed reading.    One involved Shakespeare and the other, Jane Austen.
The Bookman's Tale" by Charlie Lovett
Peter Byerly is a bibliophile.  As a child, shy and reclusive, books became his shelter, a love and security that continued through university where he was able to work in the university library's Special Collection Department amongst the rare and valuable books that the university was known for.  It was in the library that he met Amanda, his future wife and most valued companion.
The novel begins with Peter, an empty shell of a man, back in England, trying to gain his life back after the death of Amanda. He forces himself to do things trying to restart his life, but without success. He makes himself go into a used book store and while leafing through an old volume from Shakespearean times, a small water color portrait of a woman falls to the floor--a woman who looks exactly like Amanda, but the portrait appeared to be at least one hundred years old.
Finding the watercolor, done by a painter whose initials were "BB", lit the flame of curiosity and his search for information about the artist, led to the discovery of a book that could be the Holy Grail for bibliophiles and collectors--an old document with marginalia hand-written by Shakespeare, notes used for his play "A Midwinter's Tale."  Shakespeare's identity is still a mystery and the source of immense speculation and curiosity in the literary world.
"Of his life all we positively know is the period of his death.  We don't know when he was born, nor when or where he was educated. We don't know when or where he was married, nor when he came to London.  We don't know when, where, or in what order his plays were written, or performed, nor when he left London.  He died April 23rd, 1616."
Of course, anything that could be proven to be an original Shakespeare document now, or in the past, would be extremely valuable, and as such, could be the subject of forgers. This is the mine field Peter must traverse as he tries to prove its provenance.
A Bookman's Tale is written with chapters alternating between three time periods:  1995 as Peter is in London trying to regain his life after Amanda's death then discovering the watercolor and Shakespeare document,  1980's, as Peter is in university learning about ancient books and meeting Amanda, and the 1500's to recent times, as we learn about the intrigue and changing ownership of the Shakespearean document.
While it starts out being a story about the world of book selling and historical literature, this novel turns into a murder mystery.  While I didn't need all the action and suspense, the story kept my interest until the end.   I found the whole world of antiquarian book collecting, something I knew little about, very interesting.

First impressions by Charlie Lovett
This book has two story lines that develop in alternating chapters. One follows the want-a-be author, a young woman named Jane Austen, as she meets Mansfield, a soul mate in the form of an eighty year old curate, who like Jane, has an unabashed passion for novels.  Despite their immense age difference, their love of novels soon has them treasuring their time together as Jane reads to Mansfield from the book she is writing called "Elinor  and  Marianne" (later renamed "Sense and Sensibility"), and he gives her support and suggestions for improving her work.
The other plot, placed in the present day, features two other lovers of literature, Sophie, a young English lady, a recent graduate with a masters in literature from Oxford, and a brash American taking a year off to visit literary destinations in England and Europe, after two years teaching at Berkeley.  Sophie's initial bad impression of the nervy and arrogant Eric, slowly melts as he turns on his charms and she discovers their mutual love of literature.
The only member of Sophie's family that shared her love of books, was her Uncle Bertram, who owned a flat in London with a library full of rare and old books.  Because of their mutual love of books, he told Sophie that upon his death both his flat and much loved books would be hers.
When he dies unexpectedly in a suspicious fall, Sophie indeed inherits the flat, but she is horrified to discover that all of his books have been sold "to cover his debts."  She immediately felt something was 'not right' about his sudden death and the removal of his books, and was determined to get her uncle's books back, haunting bookstores, buying what she could, and even stealing what was over priced.
While alternating chapters tell of Jane Austen's close association with the elderly curate and his suggestions of changing her story Elinor and Marianne from being an epistolary, letters of correspondence back and forth among the characters which tell the story, to the type of narrative we now use, Jane discovers Mansfield himself has written a short book and is about to publish a second edition using the letter/chapter format, telling the story of the Bennet family, a Mr. Darcy, and first impressions.  He encourages Jane to use his plot as a foundation for her next book.
Back In the modern day, Sophie gets a job in an antique bookstore owned by a friend of her late uncle, and is mystified when two separate requests suddenly come in for an unknown second edition of book by an obscure 18th century curate named Mansfield, and she starts to realize that this book is somehow related to the death of her uncle.
First Impressions is a clever title for this book.  It was the original title for Jane Austen's book that later became Pride and Prejudice.  It is also a reoccurring theme as Sophie continually misjudges people because of her false first impressions.
I found First impressions to be a very entertaining read, with some interesting historical facts about Jane Austen and her works, the world of antique books, romance, and mystery.  Like The Bookman's Tale, Charlie Lovett could not resist making an dangerous, action packed, and suspenseful build up toward the ending, which I didn't really need, but still I quite liked both books and found them enjoyable.
Take a look at my photo-realistic paintings:  www.davidmarchant.ca