Immigration: What We Brought With Us 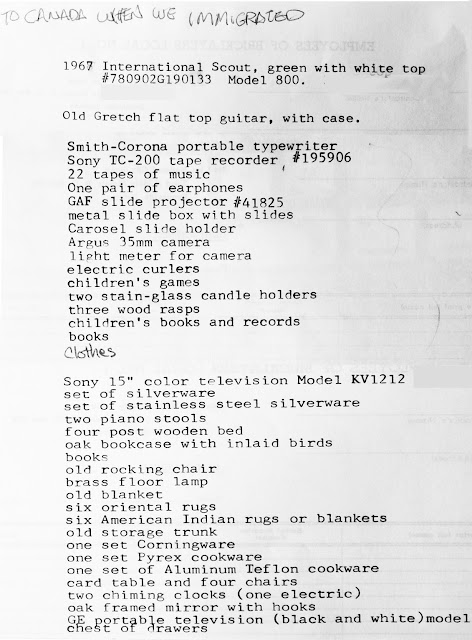 Today you often hear about refugees and immigrants having to flee to another country, carrying their only possessions on their back.  Back in 1974 when we immigrated to Canada, we at least had a car pulling a utility trailer with our possessions.  Yesterday, I came across the list of what we brought with us when we crossed the boarder.  I found it quite interesting.  We didn’t bring much and today when I look at the list, I scratch my head and wonder what we brought some of the things we did.
At the time I we didn’t have a lot of money, and most of what we brought I had bought at the Indianapolis Goodwill Store where I worked for two years as a conscientious objector.  You can see from the list my interest in music and photography.   I had taken a job as an elementary teacher in an isolated one-room school and in the list you can see we brought a lot of children’s books, records, and games.
I had to laugh when I saw that we brought two portable television sets.  Where I taught and lived for the next two years, there wasn’t any television reception, and radio just rarely, sometimes at night.
We still have some of these things, others have long disappeared.
It is strange to see how little we brought with us, now that we own a house, that is stuffed full of things.