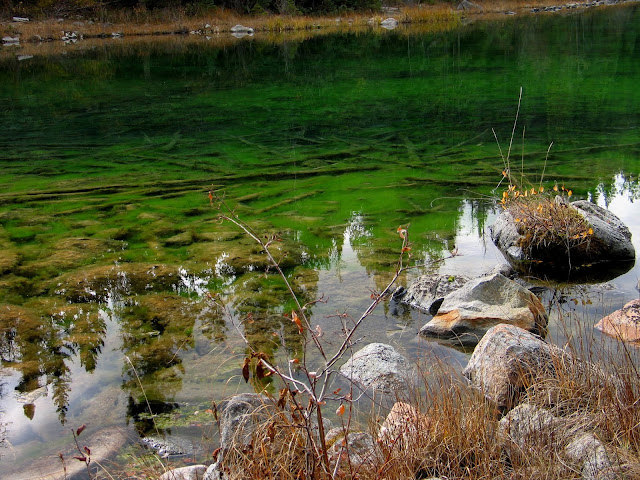 The photo above was taken in the Valley of the Five Lakes, Jasper National Park.
This year has given us three consecutive days of holidays and celebrations.  Saturday was 4:20 Day for those into smoking pot, yesterday was Easter for those into Christianity, and today is Earth Day for those of us who care so deeply about this place that keeps us and all the other living things alive.
Way back in 1970 I actively participated in that very first Earth Day, when I was attending the University of Evansville.  It was a rather small event there, my mother actually sewed up a green and white “Ecology” flag for the event.  It was an amazingly hopeful day with wide support across the US.  It had the support of both Democrats and Republicans, urbanites and farmers, rich and poor.  I was optimistic that humanity would actually start looking at the problems it was causing to life on Earth and do something to correct them.  I was young, naive, and foolish.
Big money soon moved in to subvert those concerns.  Big Oil paid millions, hiring those PR specialists who had diluted cancer claims for the tobacco companies.  They successfully began to do their lies and spinning, giving the world climate change and science deniers, Republican and Conservative policies, and loads of people that just don’t give a shit.
I find it all so depressing and sad.  Anyone who takes the time to look around can see what is happening to the Earth.  Things have gotten so out of hand that I secretly doubt that they can be reversed.  Despite the hopelessness, there are still good people who do what they can to live a life with as little impact to our home planet as they can.
Below are some of my Earth Day buttons from the past.  On the left a button from the first Earth Day in 1970, in the middle a button about overpopulation (one of the biggest problems facing the Earth that no one talks about), and on the right a button from 1990.
Think about our Earth today.

Look at my paintings:  davidmarchant2.ca