A Time To Kill by John Grisham 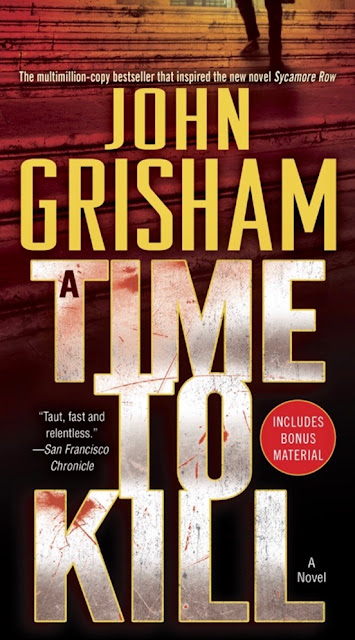 The McBride Library Book Club’s theme for April was “Author’s Debut Novel”, that is, their first novel.  I started out reading Dicken’s “The Pickwick Papers” and found it so un-involving that I quickly lost interest in it and quit reading it one-third the way through.
After I bailed on The Pickwick Papers, I was eager to delve into something more stimulating, and downloaded A Time To Kill, John Grisham’s first novel.  He had it published in 1989 with 5,000 hardbacks printed.  It was a colossal failure.  Grisham said “we couldn’t give them away.”  There were no paperbacks made.
It wasn’t until Grisham’s second novel, “The Firm” whose sales took off, establishing Grisham as a popular author, that people became interested in “A Time To Kill”.   It remains Grisham’s personal favorite among his many other successful works.
The novel begins with the horrific rape of a ten year old black girl, by two totally depraved white drunken southern rednecks, who beat her and tried to hang her in an attempt to hide their crime.  She survived, and was able to give a description of her attackers to the county’s black sheriff, who finds the two, still drinking and bragging about their rape in a nearby bar. They were arrested and jailed.
At the first court appearance of the two prisoners, Carl Lee, the father of the sexually assaulted child, hides in a courthouse hallway and opens fire on the two rapists, killing them and wounding a deputy sheriff.  The father is immediately jailed.  Everyone knows he is guilty of the killing, and it is then up to Jake Brigance, a local lawyer and main character of the story, to try to save Carl Lee from the gas chamber despite his guilt.
Like most of Grisham’s novels, it is full of the law and how lawyers work.   It details lawyer’s tactics, many of which are questionable and illegal but lawyers use them anyway to to win their cases.  I found all the lawyer backroom maneuvering immensely interesting and they make this tale very compelling.
The story is set in a small Mississippi town so there is a lot of local color, racial problems, prejudices, lawyer maneuvering, and small southern town politics, which all come into play as Jake struggles to save his client, who is so poor he can’t really afford to pay Jake’s fee.  The case riles up the Ku Klux Klan whose involvement leads to assaults, arson, and more murders.
The old saying, “It ain’t over til it’s over” certainly applies to this novel because there is always some unexpected event that pops up to keep this very engaging tale exciting, causing the reader to hungrily devour  the novel all the way to the conclusion.
I found it remarkable that this first novel of Grisham didn’t make it when it was first published.  It is a very engrossing story that certainly kept me entertained.

See my photo-realistic paintings at:  davidmarchant2.ca