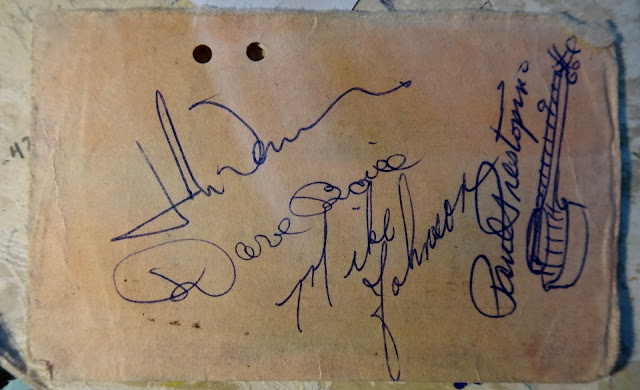 Back in 1963 and 64 when I was in high school, my favorite TV show was something called “Hootenanny”.  It featured concerts that folk singers gave at universities.  I loved folk songs, both the old traditional ones and the contemporary ones that touched not only on love, but also war, race, and other progressive themes.  I loved the performers, the harmonies, the instruments, and I also had great admiration for those song writers who composed the songs.
The show featured people like Judy Collins, Flatt and Scruggs, The Smothers Brothers, Ian and Sylvia, The Brothers Four, The Limeliters, and The Chad Mitchell Trio.
Because I paid so much attention to the song writers, I knew about Bob Dylan and John Denver before they hit it big and became popular.  I didn’t know what they looked like or what they sounded like, but I knew their names and appreciated their writing abilities.
The Chad Mitchell Trio was one of my favorite groups.  They had wonderful harmonies, and sang a lot of humorous songs about such things as the ultra-rightwing John Birch Society, and the Draft Dodger Rag.  Chad Mitchell, the short energetic leader of the group, had hair that swept down on his forehead and that inspired me to start growing my hair longer, which got me in a great deal of trouble at my high school the day after the Beatles appeared on Ed Sullivan, but that is another story.
Anyway, Chad Mitchell eventually left the group, and leaving his fellow group-mates scrambling around to find a replacement, and the group had to change its name to just the “Mitchell Trio.”  They continued to travel around the US giving concerts.
As I continued my love of folk music, listening to a Peter, Paul, and Mary album, I came upon the song “Leaving on a Jet Plane”.  The song knocked me out, and I noticed that it was written my someone named John Denver.  That’s about all I knew about him.
Sometime after 1969, I discovered that the Mitchell Trio was going to be giving a concert in my hometown of Evansville, Indiana.  I bought a ticket and went to see the performance.  To my surprise I discovered that Chad Mitchell had been replaced by that song writer John Denver, who was not only a great songwriter, but also a very good singer.  The group did a lot of the songs I had heard on the Hootenanny TV show, and they also did Denver’s “Leaving on a Jet Plane”.
After the concert, the audience left, and I walked back stage to see if I could meet the group.  Amazingly, I was able to.  I got everyone’s autography on the back of my University Student Union Card.  (I didn’t have any other piece of paper they could sign).  When I talked to John Denver I told him how much I liked “Jet Plane”, saying I thought I could die a contented man if I had written something as good as that.
Years later, John Denver became a super star.  In a recent PBS special about Denver, it was stated that what Elvis was in the 1950’s, and The Beatles were in the 1960’s, John Denver was in the 1970’s.  He became a massively popular singer, and I actually got to meet the guy years earlier.


Tonight is our jam night.  We do have a few of Denver’s songs that we sometimes play.  We do his “Country Roads”, “Annie’s Song” , and “Leaving on a Jet Plane.”  I think about my “brush with fame” every time we play one of his.

Visit davidmarchant2.ca to see my paintings.