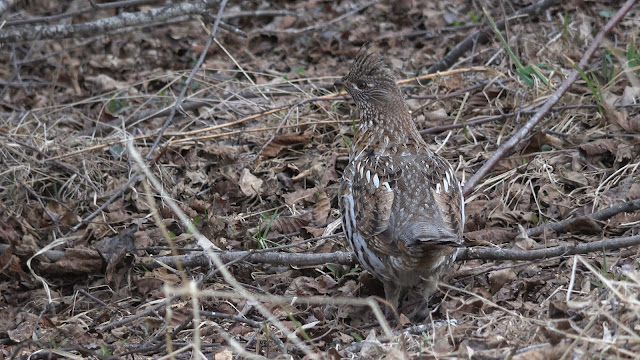 The other day when we walked around the pond, there was a Ruffed Grouse standing on the trail.  When it saw us approach it scuttled off the path into the brush on the side of the dam and stood very still.  Because I had seen it move off of the path I knew it was there, but had I not seen it, I probably wouldn’t have noticed it in the brush because of its remarkable camouflage that blended so well with its surroundings.
Even though it stood still, the grouse didn’t fool Lucifer our cat, who had joined us on our walk.  Lucy suddenly sprinted toward the bird, causing it to take flight across the pond.  I’m not sure what caused Lucifer to sense it’s presence.
Usually just standing still is a pretty good defense for grouse, because they usually blend in so well with their surroundings.   That strategy doesn’t work very well when the grouse is standing still in the middle of a road, thinking it can’t be seen.
Last week when I drove into town, I came upon a grouse standing in the road.  It stood still, thinking it it couldn’t be seen.  I edged my truck over toward the middle of the road to avoid hitting it, but half an hour later as I was returning home, I sadly saw the feathered remains of the bird laying in a lump in the middle of the road.
t’s amazing camouflage hadn’t kept it safe on the wide dark open pavement of the road.

Visit davidmarchant2.ca to view my paintings.