How OI Ended Up On A Cross 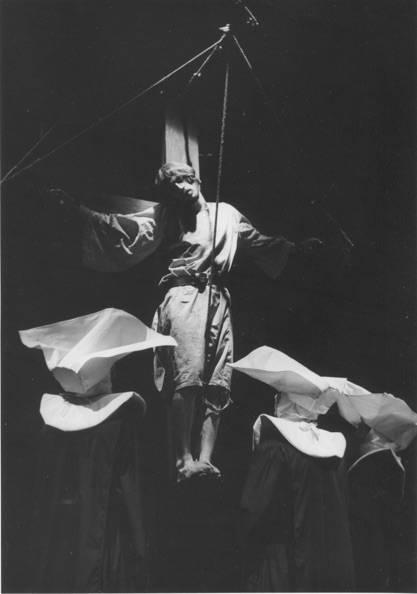 Since today is Good Friday I thought it might be a relevant time to relate one of the strange moments that I have experienced in during my life.  It was the time I was hung on a cross, 10 ft. (3m.) up in the air.  Yep, that’s me on the cross.
The University of Evansville, where I went to school, was recognized for its fine drama department.  As I was swerving back and forth, unable to find a direction for my education, I was checking out all the different opportunities available to me in university, I landed a few times in drama.
I was in a couple of plays, never in a leading role, (those always seemed a bit too scary for me) so I always gravitated to the “other actors” roles.  I enjoyed being on stage without the responsibility of remembering and speaking a lot of dialog.
In the winter of 1969, the U. of E. drama department put on the avant garde play:  “The Persecution and Assassination of Jean-Paul Marat as Performed by the Inmates of the Asylum of Charenton Under the Direction of the Marquis De Sade”.  The title of this musical play is usually shortened to “Marat/Sade”
It was a strange play, and like the title suggests, it is a play about a play, that was put on by the inmates of an asylum.  I played the part of one of the inmates.
As an inmate, we were supposed to act like we were not ‘hitting all the right keys’, and I did seem to excel in that department.  I was several times complimented on my characterizations by the director.  We had to look like discarded people, and so I didn’t shave, and I let my already long hair, grow longer.
All the inmates wore beige cotton gowns, and we were supposed to make them look disgusting, so I applied tea and water to stain the neck and armpits.  As the main characters followed the plot, we inmates, wandered around the thrust stage, and stared at the audience.  It was great fun.
The play touched on many themes, but mostly it was about the desire for a revolution in pre-revolution France.  In one scene of the play, one of the main characters, was strung up on a cross to be crucified.  It was meant to display, what happens to individuals who speak out in an attempt to improve the lot of humanity.  As it happened, the guy whose part it was to be strung up on the cross, in real life had leukemia.  I had noticed huge bruises on his body several times in the dressing room.  Unfortunately, in the middle of the play’s run, he became extremely ill, soon after died.
The director, was always very complimentary to me, and started to comment openly several times about how much I was starting to look like Jesus, with my lengthening hair and developing beard.  When the actor with leukemia was forced to withdrawal from the play in the middle of the plays run, it was too late to re-train someone new to do the part, so the part was just scratched from the play.  The director however wanted to keep the crucifixion bit in the play, and told the cast, that when they got to the crucifixion scene, they should just grab me and string me up on the cross.  The play was fairly confusing anyway, so it didn’t seem to make much difference to the plot.
So, I found myself, strung to a cross, which was dangling from ropes, high above the audience.  It was one of those memorable and unique moments in my life.  When we had the cast photos made of the play, the director insisted that one was made of me on the cross.  He later showed me that he had made a couple of posters of the shot, and gave me a copy, but I think it got destroyed by mice in my garage.  Fortunately, I still have this photo.