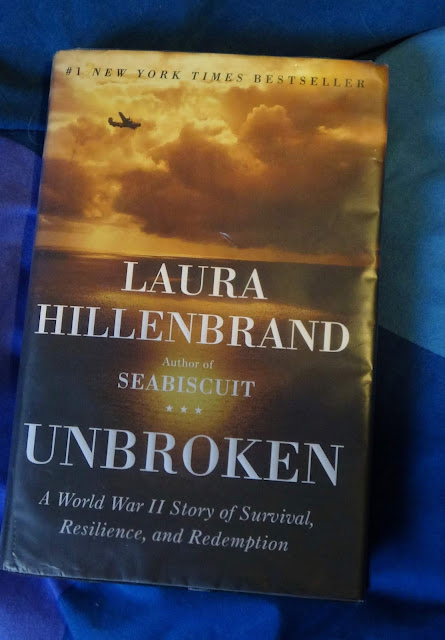 Just a note from yesterday:  I did win my appeal and the assessment on my mountain-slope property will stay the same as last year instead of the 60% increase.

This book was a biography of Louis Zamperini, who lived an extraordinary life, first as an untamable youth stealing and causing innumerable problems in his neighborhood, then transforming into a gifted track star who, despite his young age, represented the US in the 1936 Berlin Olympics,.
World War II, derailed his plans to run in the 1940 Olympics, and he ended up as the bombardier in a B-24 bomber in the Pacific.  His luck held up through many near tragic missions, including one where his plane limped home with 600 bullet holes in it.
When his luck did finally run out, he and two other crew mates found themselves floating across the Pacific, without a supply of food or water, pursued by sharks in a leaky inflatable raft.  He and one of crew mates managed to survive.  Near death, they were finally rescued on their forty-first day adrift.
Unfortunately his “rescuers” were the Japanese, and he spent the rest of the war, brutalized and starving as a POW in several subhuman Japanese camps.  He became the daily target of an infamously cruel camp commandant, nicknamed “The Bird” who made his life a living hell.
At the end of the war he returned to the US, and became a celebrity as the Olympic miler who had been reported dead, then miraculously returned home alive.  PTSD, caused by his POW experiences, soon turned his life from being a celebrity into being an unstable drunk.
Marriage and Billy Graham rescued him from a life in the gutter, and from the sounds of it, he lived an admirable life thereafter.
“Unbroken” was a very interesting and well researched read.  Zamperini did live an extraordinary life.  It sort of reminded me of Forrest Gump, in that, like the Gump character, his life was entwined with several famous historical events. I did feel at times that some of the incidents in the book were exaggerated, and hard to swallow.
I read this book for our McBride Library Book Club, whose theme for February was “Books that 2018 films were based on.  I couldn’t understand why this book was on the list for movies that came out in 2018, since I was sure I had seen the film on TV a few years ago.  After some research I discovered that there was a film “Unbroken,  The unbelievable True Story” based on this book that was released in 2014. It got fair reviews.
Then a religious group made another movie based on the book that was the 2018 film.  That movie, “Unbroken, Path to Redemption” concentrated on the religious aspects of the novel.  It didn’t get very good reviews by film critics, but the religious crowd liked it.