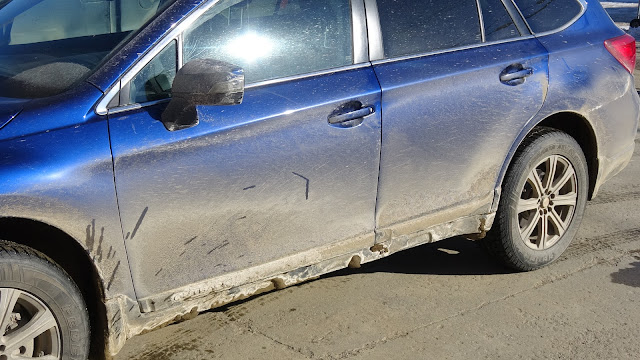 Even though it’s been unusually cold ( -22C, -7F this morning) and below freezing (except for one afternoon) for weeks, our car is filthy.  This seems to be its default condition during the winter.  In the back of my mind I always think of winter as being a “clean” season with all the pristine white snow covering the ground and dirt, but I guess I always forget about all the sand, gravel, and salt that the highways dept. puts on the roads.
Every time we get close to our car to open a door, all that dirt on the car rubs off onto our clothing.  Disgusted and tired of the dirt, last week when we were up in Prince George, I took advantage of the fact that they have car washes, (we have none in McBride) and washed our car.  I was amazed at how shiny and blue it was when I had finished.
Then we drove back home to McBride, and when we arrived home and got out of the car, it was just as dirty as it was that morning when we drove up to PG.
When I look around everybody else’s car seem clean.  Maybe their cars just don’t show the dirt or maybe they know some secret that I don’t.