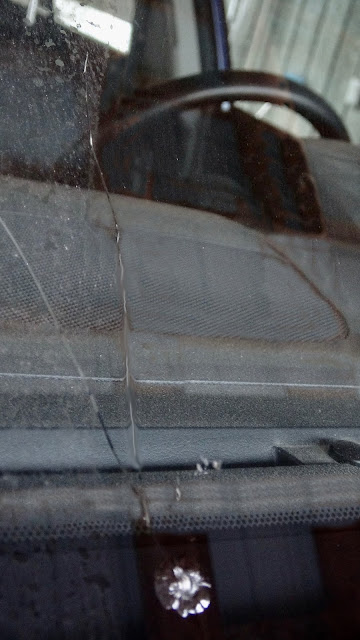 One of the souvenirs BC drivers often receive while traversing the winter highways in the interior of the provincd is a cracked windshield.  That is what happened to me yesterday when I had to drive up to Prince George for an appointment.  There had been a snowfall the night before and the Ministry of Highways had done some plowing and sanding.  Actually if they had actually used sand I wouldn’t be writing the blog about cracked windshields.
Up here when we refer to “sanding” what actually takes place is “graveling”.  There are small rocks in the “sand” sometimes the size of the tip of your thumb.  Whenever a transport truck comes toward you you find yourself cringing and praying that no rocks fly up from its tires and strike you windshield.
The “jewel” in the photo photo above shows where a rock struck my windshield yesterday, and you can see the cracks that emanated began from the hit that began to grow almost immediately after the impact.
Three months after buying our car new, we had just pulled out of our road onto the highway, at the beginning of a four day trip to Indiana when a rock shot up from a truck tire and hit our windshield.  That resulted in several cracks that spread all across the glass.
A month or so ago, on another trip up Highway 16 to Prince George, we experienced another rock hit, but fortunately it was just a “ding” and we had it sealed at a glass store so it wouldn’t grow.  Unfortunately yesterday, by the time I got to PG it was too late to seal this hit, the cracks had already starting to spread.
Replacing a windshield can be an expensive proposition.  My insurance will pay for 3 seals a year.  And we are fortunate that we opted for insurance that will replace a cracked windshield, so I will not be out of any new money, but it means hanging around a glass replacement shop for the installation sometimes when we are up in Prince George.  I’m not about to do that until the winter road season is well over.