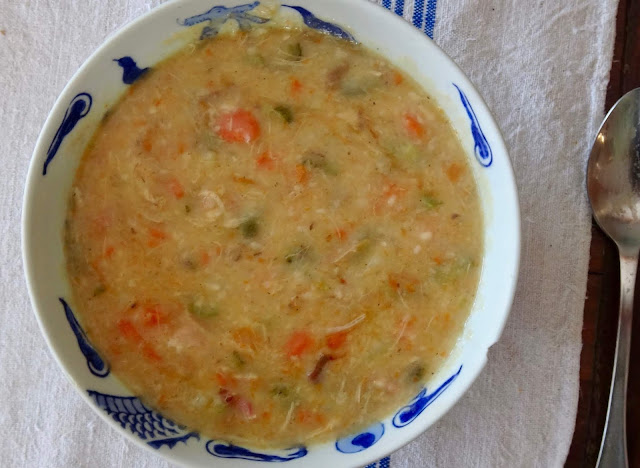 Diane, a neighbor stopped by the other day to drop off a book I had won at the healthy living workshop, and while she was here she mentioned that she was eager to get home because they were going to have some Dill Pickle Soup for lunch.
“Dill Pickle Soup?” I queried, and then she on to explain and praise the soup.
I am very traditional in my pickle eating.  I like them on sandwiches and as an appetizer, but I had never heard of pickles being used as a basis of soup.  The thought of it did make me very curious, and the curiosity probably would have faded away if Diane hadn’t forwarded us the recipe when she got home.
Yesterday, recipe in hand, I decided I was going to make some just to see what it would taste like.  I fix and eat a lot of soup anyway, so I decided to give it a try.
In the soup was chicken broth, bacon, carrots, potatoes, sour cream, butter, and of course dill pickles and dill pickle juice.  I didn’t follow the recipe exactly because I used my Instant Pot, and having just I returned from the healthy living workshop, I decided to cut the amount of sour cream in half.  I also didn’t have or know what Old Bay seasoning was.
Anyway, I fixed my version of it, and the result was quite tasty.  The little chunks of dill pickles were a nice flavor burst in the mouth.  I’ll probably not fix it again, only because it seemed like all the preparation took a long time and seemed a bit to involved for my usual “fix-it-fast” meal preparation style.  We do have some left over and I am looking forward to eating it again for lunch.
If you want to try it, here is the recipe that I based of my version of Dill Pickle Soup on: