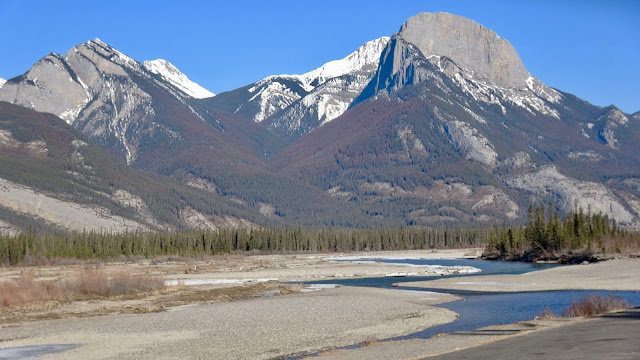 Jasper National Park, one of the jewels of the Canadian Rockies, is under attack by the rice-sized, but deadly, Pine Bark Beetle.  At first glance the photo above may just look like a mountain landscape shot, but if you look closer at the trees up close to the peaks, you will see a reddish color.  That color indicates dead pine trees that have been killed by the Pine Bark Beetle.
Twenty years ago, thousands and thousands of acres of pine were killed by the pine beetle in British Columbia, over the last 10 years the beetle has moved into Alberta, and the results there have been the same.  Most of Jasper National Park is covered with Lodgepole Pine, and so vast areas of forest are now being killed.  There is really nothing that can stop the beetle.
This infestation is yet another symptom of Global Warming.  In the past the really cold weather that we used to get during the winter, would kill off a lot of the beetles and keep them in check, but winter after winter, the temperatures have been much milder than in the past, and that has allowed the beetle to multiply and thrive.
I have read some articles that hope that this past winter, which was unusually cold compared to the winters of the recent past, might have killed some of the beetles which spend their winter underneath the bark of the trees.  I guess we will wait and see, but sadly, it is way too late for the hundreds of thousands of acres of pristine forest that have already been killed.