"The Smell of Money" 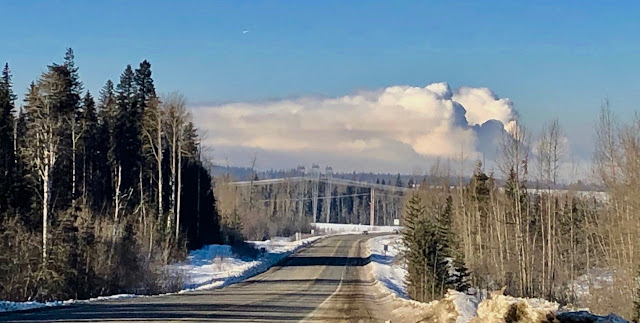 Yesterday we made another one of our trips to Prince George.  It was a very cold morning (-22C, -7F).  There was not a cloud in the clear blue sky.  However, as we approached PG we saw the white billowing plumes from the pulp mill.  Prince George lies in a bowl, and often if there is a temperature inversion, all of that smelly air from the pulp mill blankets that bowl, leaving Prince George gray with a sickly sweet smell.
It was evening in September of 1973 that we first visited Prince George.  We needed to find a motel room for the night.  We couldn’t figure out what the smell was.  We soon learned it was the pulp mill.
Luckily yesterday, we discovered that the pollution we saw was not collecting in the Prince George bowl, but was dispersing elsewhere.  I assume most of the time that is the case.  I always remember one day while working for the Forest Service, I had to drive up to PG for some reason.  All the way from McBride to Prince the skies were blue, sunny, and clear.  When I drove down the hill into Prince George, the sky was gray and smelly.  I was so glad I lived in McBride and not Prince George.
Whenever I would remark about the smell of the pulp mill, I often received the reply, “It’s the smell of money.”  I guess you can look at it that way, but I would rather have clean air.