As For Me And My House by Sinclair Ross 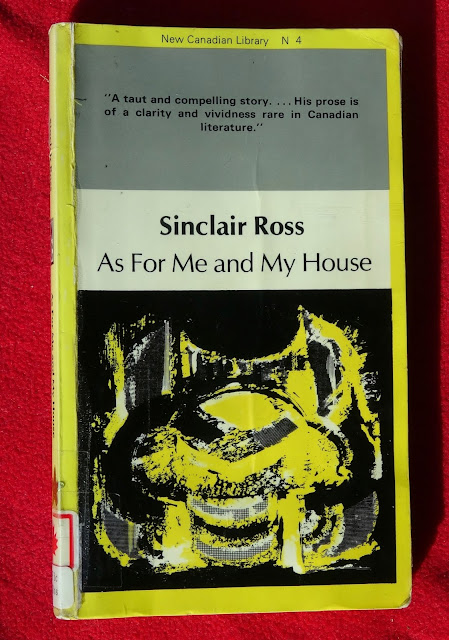 The theme for the McBride Library’s Book Club for March was “Canadian Classics before 1940”  When I looked at some of the possibilities laid out on the library’s bookcase, I came upon “As For Me And My House” by Sinclair Ross.  It was a novel I had never heard of so I chose it and read it.  Here is my review:

As For Me And My House by Sinclair Ross
This novel, structured like a diary, is written in the first person by the wife of a minister.  The couple has just moved to Horizon, a bleak small prairie town in Saskatchewan during the Dust Bowl days of The Great Depression and like the Depression, the things she writes in her diary tells of of a life that is dreary and without much joy or hope.
Her  husband Phillip, was a once aspiring artist, who gave up that dream to become a minister.   Before she married, the wife, an accomplished musician, had dreamed of becoming a pianist, but now she struggles to fulfill her role as a minister’s wife with all it’s social restrictions in the small town. Both she and her minister husband no longer believe in religion and are forced to be hypocrites in the roles they play in the small bleak prairie town.
The novel begins in the spring, as these two unhappy people move into Horizon, another in a string of previous such towns.  Phillip preaches in the church, for a subsistence-level pay cheque that keeps them in poverty.  The parsonage they live in is a small, leaky, house that they both hate.
Phillip, torn by the guilt at being a hypocrite, is extremely unhappy with his life, and increasingly isolates himself from his wife, as he sketches in his study, leaving her alone in the hated house.  She is often afraid to bother her prickly husband although she craves his company.
Twelve years earlier, their marriage had produced a son, but he was stillborn.  The couple remained childless in the intervening years, but it hadn’t dampened  Phillip from wanting a son.   When a twelve year old Catholic boy, from a frowned-upon family in town is abandoned, Phillip wants to take him in permanently.  His wife relents, hoping that it will change their failing relationship.
It does cheer Phillip up, but his wife then often feels jealous, because all of Phillip’s attention and gifts go to the boy Steve, when she has been deprived of nice things and attention for years. Having Steve does positively change the couple and makes their life somewhat better, but this “adoption” of Steve also causes the couple to feel some of the silent wrath of the bigoted townsfolk, who hate Catholics.
Steve however quickly and easily fits in with his new family, and even though their income is very low, he is spoiled by Phillip, who relents and buys the boy a horse.  The boy Steve often prefers the company of the wife, which then makes Phillip jealous.  The couple is left floundering in their unhappiness when Steve is taken away and shipped to an orphanage by two priests, who were informed by someone in the town that a Catholic boy was being raised by a Protestant family.
His departure at last makes Phillip start to reconsider his life in small town ministries, something his wife has been encouraging, but then an incident occurs that threatens the marriage that is already hanging by a string.  You will have to read the book to see if things finally begin to lighten up for these two people whose lives have sunk so low in the during the Depression on the Canadian prairies.
Ross’s novel paints a dismal picture of small town life in the unrelenting wind and dust storms that devastated agricultural communities in Saskatchewan.  While reading the novel I noticed how often he referred to moths flying around the coal oil lanterns.  False-fronted buildings were also mentioned a lot, I assume they were symbolic of Phillip, who was trying to present himself as something more than he was.  The word “white” was also used a lot, mostly to describe people’s pale faces, tight lips, or clenched fists.
Despite the bleakness of this novel’s setting, It did keep me interested in the lives of these two people.  There was very good character development which gave the reader real insight into these two misplaced individuals.


Go to davidmarchant2.ca to see my paintings, cartoon, and blogs.
Posted by Life in BC's Robson Valley at 09:38