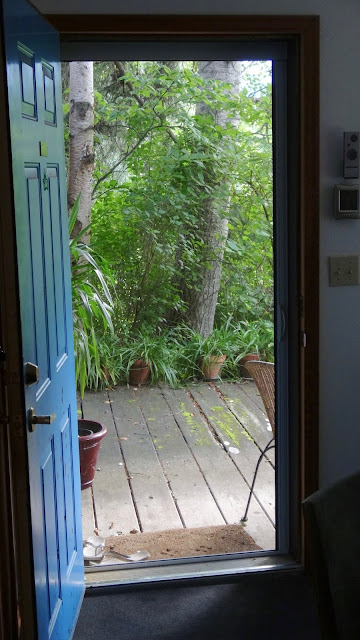 We have  been needing a screen door to our back deck door for years.  Early in the spring when we were at Costco, we saw this ‘pull out from the side’ screen door, that rolls out from the side of the door opening and attaches to the other side with a magnetic strip,  and like our usual impulse buys we loaded it onto the cart and bought it.
When I installed it we were shocked:  when it was closed, it was almost invisible from the inside.  Our cat and dog bumped into it when they first tried to go outside, and even Joan brushed against it once when she hadn’t noticed it was closed.
To prove my point, the photo above is the open door with the screen and the one below is the open door without the screen.  Scary, isn’t it.
The other evening, I walked passed our door to the deck and noticed that Joan had opened it.   I remarked, “That screen door is amazing, how invisible it is.”  She agreed.
It was time for bed, and both the cat and dog were safe inside the house.  About 20 minutes later Joan said, “The cat is outside.” and this puzzled me because she had been inside and no one had let her out.
Then we figured it all out.  When Joan had opened the door to the deck, she forgot to slide the screen door closed, so the cat just walked through the open door.  Since the screen door is so invisible, we both had just assumed that the screen was there.
We got the cat back in, and shut the door to the deck and went to bed.  Fortunately, there aren’t many mosquitos outside now.  Had there been, having the door open without the screen would have been a disaster. 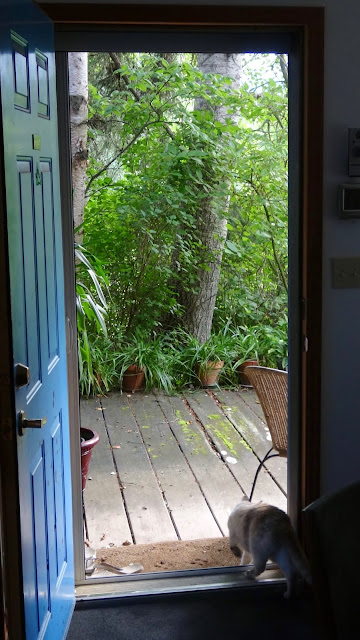