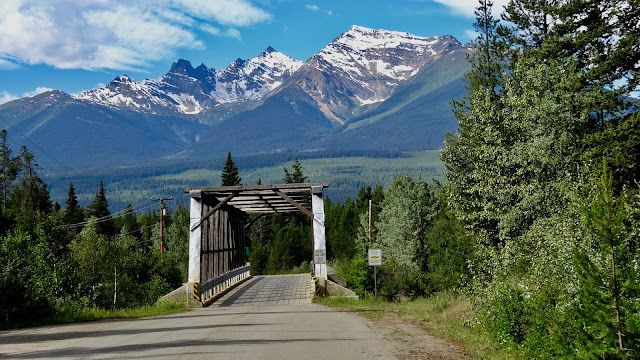 We had to go to the vet in Valemount yesterday to get some shots for Skye.  Normally the route for us is to drive east on Hwy. 16, to Tete Juane, then turn south on Hwy. 5.   Even though there are a lot of straight stretches on Hwy. 5, there are also a lot of Alberta drivers, many of which are in a big hurry, which all too often result in fatal accidents, so since we had time, we decided to take Blackman Road south, instead of Hwy. 5.
Blackman is a scenic and leisurely country road, which begins at Tete Jaune where it cross the old wooden Fraser River bridge.  As we drove down Blackman, I began to worry that we might be stopped by one of those incredibly long freight trains, which would cause us to be late to the vet.  There was a train, but luckily it was the Rocky Mountaineer, the high-class tourist train with view cars and fancy food.  It was a very short train in comparison to the freight, so the drive to Valemount was quite a pleasant experience.