The Library at the Edge of the World 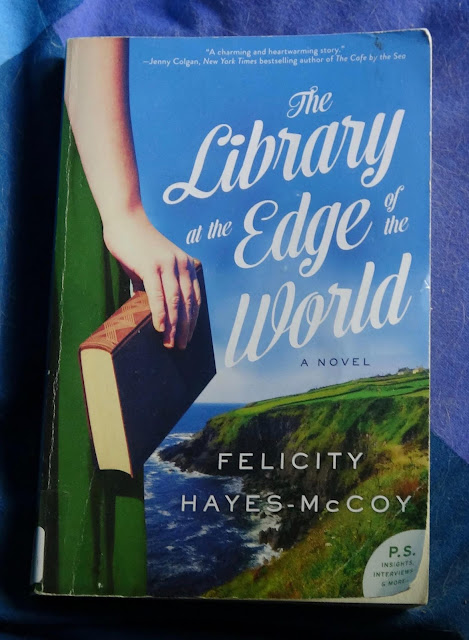 Today is the McBride Library’s Book Club meeting.  The theme for May was “Libraries or Librarians.”   I was not overly thrilled with the theme, but I missed last month’s meeting, so couldn’t give any input about what we were going to read next.  Being the good sport that I am, I picked The Library at the Edge of the World  by Felicity Hayes-McCoy, to read.  Here’s what I thought about the book:

The main character in this novel is a middle aged woman named Hannah, who runs the public library in a smallish town located on a peninsula in Ireland in current times.  She comes off as being one of those stereotypical stern, civil, but rule-based librarians.
The library she runs is located in part of an old convent school building. Hannah has one employee who works a couple of days a week when she is off driving the bookmobile to isolated communities on the peninsula.  She is not happy in her life, she is a single mom with a 20 year old daughter who works as a flight attendant and so only comes home occasionally.
Hannah’s major problem is her argumentative and opinionated mother who she lives with.  She moved back to her mother with her daughter, after leaving her husband when she caught him in an affair.  Now after fifteen years of living in this situation, she has decided to fix up, then move, into a derelict cottage on a cliff overlooking the sea, that was willed to her by an eccentric aunt.
Hannah asks her library assistant if he knows any builders who can fix up the cottage and upon visiting it one day, she discovers a grizzled old man there already working on it.  His name is Fury, and although everyone says he is an excellent restorer, he is a law unto himself and does work on the cottage without her consent, which drives her crazy.
In the midst of this construction project, she discovers the library itself and her job are at jeopardy, as the regional government has plans to consolidate it and other community services to a larger, faraway city.  She and an old activist nun, who she happened to run into, then plot to save the library, and community services for the small town.
There were just too many far-fetched events in the novel for me to like it very much. Fury, the gruff, excellent builder who was able to secure all sorts of amazing things for the Hannah’s cottage by trading his own possessions for them, did not come off as being realistic, and I couldn’t swallow the way all of the disjointed members of the community suddenly jelled into a unified force after someone found an old convent book about herbs in the library.
I did finish reading the novel, but without much enthusiasm.