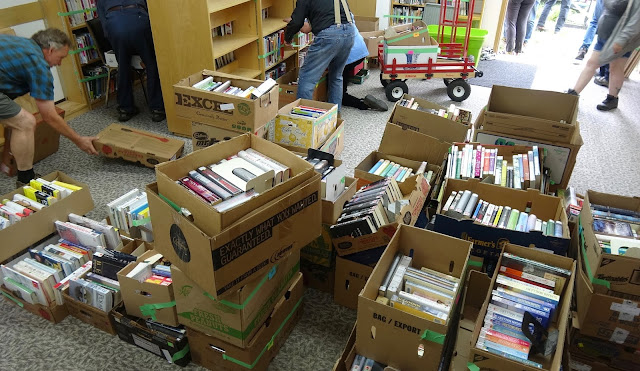 Yesterday was a red letter day for our McBride community; finally we were able to transfer the McBride and District Library from its old building into its new home on Main Street.  It had been a struggle for many years to make it happen.  Money had to be raised, politicians had to be voted out of office, bureaucracies had to be dealt with, but finally the day had arrived and we were physically moving books into our new building.
It was amazing how well the big move came off.  It was both quick and efficient, thanks to many volunteers and a well thought out and organized plan.   Sixty-five people in our small community had signed up to help, but more than that came to lend a hand with the move.
We were organized into separate jobs.  I was in the old library, taking books off of the individual shelves, putting them in boxes with the label of the row and shelf from which they came.  Others carried the boxes of books out to load on the pickup trucks.  While this was going on, another crew was right behind us, dismantling the now empty bookcases which were also trucked to the new location.
At the new library, another crew of volunteers were doing the reverse of the jobs we were doing at the old library; reconstructing the bookcases, carrying in the boxes of books, and re-shelving them on the designated book shelves.  At lunch we were treated to chili and buns.
It was so gratifying to finally see the new library take shape.  It was good to see so many dedicated people helping to make it happen.  I was saddened at the thought that some of the people that had worked so hard to get this project off of the ground had passed away and were not there to see the result of their work.
Yesterday, made me proud of our little village of McBride.
The photo at the bottom shows the books in their fancy digs in the new library building 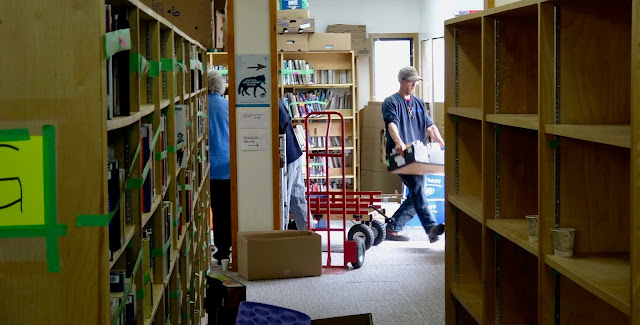 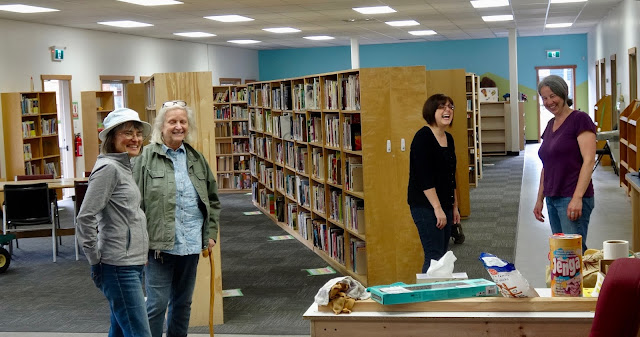