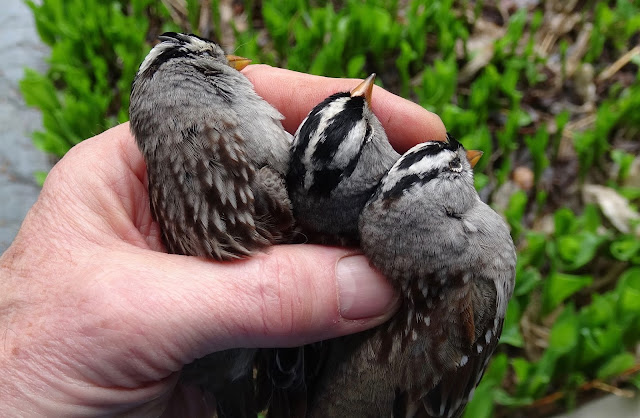 Yesterday afternoon I was in the house when I heard, “Thud,Thud...Thud”.  I knew instantly what had happened; some birds had flown into the window.  Never had I had three of them hit at once.  I went out to the porch and found the three corpses of the unfortunate White Crowned Sparrows.  Two were laying on top of each other in the cat nest, , where they had fallen, and the third was laying in the cement floor of our front porch.
I walked back into the house to get my boots so I could move the bodies.  When I got back out to the scene of the carnage, I was shocked once again, because there was a fourth White Crown Sparrow, stunned, but still alive, standing beside the cat nest.  I took it out to the yard, then picked up the three corpses and took them out to the pasture so they could serve as food as they composted.  By the time I got back to the house, I was happy to see the stunned one had flown off.
It is always such a tragedy to experience birds, full of spirit and springtime jubilance, instantly turned into lifeless detritus, because they flew into a window.  In the US alone 988 million birds are killed this way every year.
In the past I have rigged up netting in front of the upper level windows in our house, but that eventually deteriorated and I haven’t done anything further since then.  I have had owls, hawks, hummingbirds, grouse, and other birds hit our windows.  Fortunately most birds just end up stunned, and recover, but it is always so hurtful to see so many of them die so uselessly after slamming into the windows. 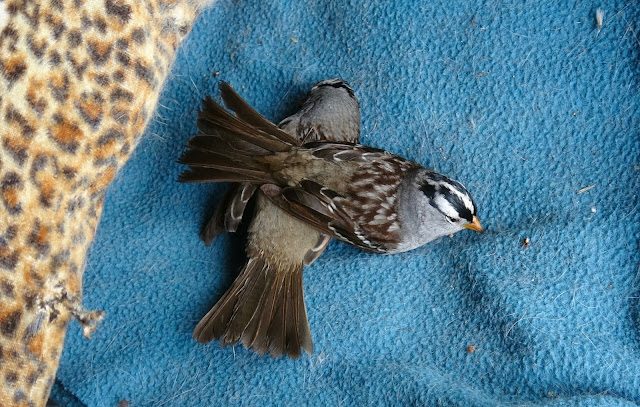