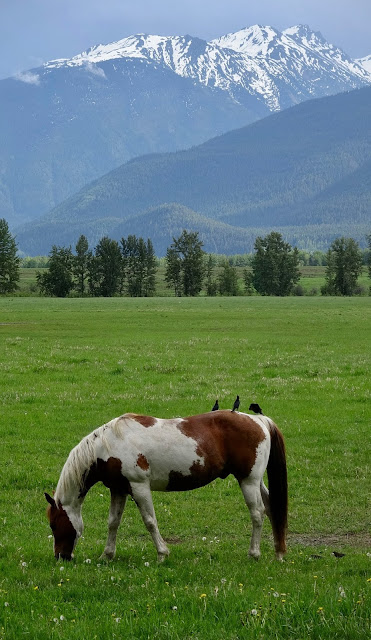 Cowbirds get their name because they are commonly seen hanging around cows.  They sit on the cow’s back and as the cow wanders around, disturbing insects in the grass.  The cowbirds then swoop down and eat the insects.  Of course cowbirds are not exclusively found on cows, as you can see in the photo.
Originally in North America cowbirds rode around on the back of bison, but as the bison were hunted to near extinction, they adapted by switching to cattle which were increasing in numbers.
As more forested land was cleared and more cattle introduced, the range of the cowbird spread eastward and northward.
Cowbirds have a bit of a unsavory reputation because of their nesting habits, or lack there of.  In fact they don’t even bother making a nest.  Instead they sneak their eggs into the nest of some other unsuspecting birds and let that other bird do all of the raising of their fledgelings.
I took this photo right before the rain started to come down.  You can see the dark clouds over the Cariboo Mountains.


View my paintings at:  davidmarchant.ca
Posted by Life in BC's Robson Valley at 08:58