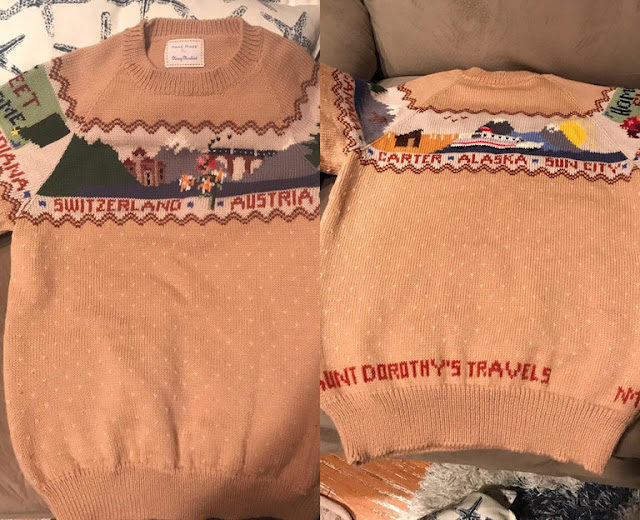 Nancy Marchant is my sister.  She has become a knitting guru, developing and expanding a whole genre of double-sided knitting called Brioche (She is now referred to as “The Queen of Brioche”).  She has had articles published in most of the top-notch knitting magazines, she has written several books on knitting, and travels the world giving workshops.  In short she has become a star in the rarified world of knitting.
Recently someone poking around in a Goodwill Store in Indiana found the sweater you see above.  It has a label in it saying it was made by Nancy Marchant.  The finder was so thrilled, she took the photo and wrote about her “find” on the internet which caused a flurry of excitement:
(https://www.reddit.com/r/knitting/comments/6umwtv/struck_gold_at_goodwill_today_thought_this_sub/  )
I hadn’t remembered the sweater until I saw the photo.  Nancy made it for our Aunt Dorothy way back in the 1980’s, after my aunt returned from a big vacation to Europe and Alaska.  You can read the names of the places she visited on the sweater.  (Carter, is a small community in Montana, where our grandmother homesteaded and built a small cabin.)  Dorothy is now 101 years old and living in a home, so I imagine she now longer needed the sweater and donated it to the Goodwill.
It is exciting for me to see that my sister is now so well known that something she made so long ago is now considered a collector’s item.  Way to go Nancy.


You can view my paintings at:  www.davidmarchant.ca
Posted by Life in BC's Robson Valley at 09:41