Such A Long Journey by Rohinton Mistry 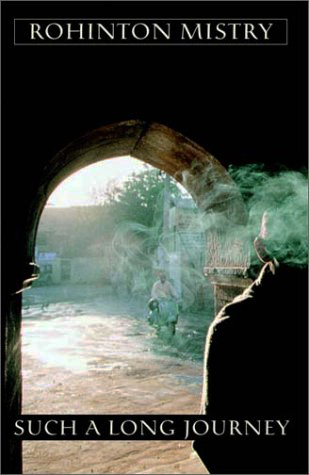 Here is another book review:

Such A Long Journey   By Rohinton  Mistry  (Ontario)
Rohinton Mistry is one of my favorite Canadian Authors.  I was very impressed with his two most famous novels:  A Fine Balance and Family Matters and while I think I had read this earlier novel before, I didn't remember the storyline, so I decided to read it again.
Immediately I was thrust into the midst of an East Indian family, living in an apartment in Bombay, in the early 1970's.  The main character and head of the family is a man named Gustad, he is an honest, honorable man, who wants to do right, and who lives with his wife, two sons, and daughter.
Gustad has a job in a bank, which provides just enough income for his family to live a no-frills life. As the novel proceeds, one after another problems are added to Gustad's life and he is forced to juggle them all, while maintaining his family.
Gustad is heartbroken and angry when is his eldest son, who has passed the exam that will enable him to attend a good technical school, refuses, because isn't interested in engineering, being more inclined towards the arts.  A close friend and neighbor, an ex-military man, who suddenly moved away without a word years ago, unexpectedly sends Gustad a huge package of cash and asks him to secretly deposit it under a false name, into the bank where Gustad works.
Gustad suspects the money is not legitimate, and is at once, suspect of this man who once was his closest friend, who now writes he is working for the Indian spy agency, and this money is part of a secret operation.  Gustad is hesitant to put his job and family in jeopardy and he stresses about what he should do.  A mentally deficient neighbor had seen Gustad with the bundle of cash and had told others about it.
Gustad worries about his daughter who was getting sicker and sicker with an intestinal ailment .  The long wall by their back alley was being used by passers-by as a place to urinate, causing both smells and a mosquito problem.  These and an increasing number of other problems began to crowd in to Gustad's life.
To solve some of these problems his wife secretly performs witchcraft-like rituals, learned from a superstitious neighbor woman, that include lizard's tails and mouse droppings.  When these rituals fail to solve the problems, they are escalated to the point where she starts involving the mentally deficient neighbor.  All these problems keep the plot interesting, as do all the Indian cultural practices, and the bits of Indian politics that surround the story.
Rohinton Mistry's Such A Long Journey is well written with great characterizations and an interesting storyline. It was a pleasure to read it again.

My paintings can be seen at:   www.davidmarchant.ca