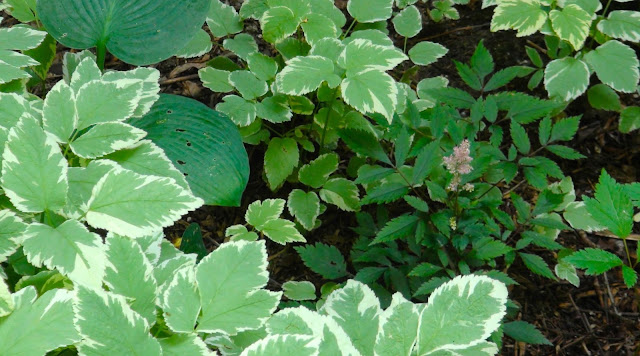 Way back on July 18, 2013, I wrote a blog about this Astilbe that I had bought that had come in a package of “Shade Loving Plants” that I bought at Costco.  I had never heard of the plant before that was described as having a beautiful bloom.  Here is what I said in that old blog:

Our yard is very shady, so when we look for plants we have to find ones that can tolerate a lot of shade.  Early last spring, Costco had various packages of plant roots for sale.  One package was full of “shade-loving” plants.  It had 5 ferns, 5 hostas, and another plant that had an unusual name, that was supposed to have a flower on it.  (My cousin later identified the plant as an Astilbe)
I love ferns and hostas, so I would have bought the package anyway, but I was very intrigued by the flowering plant, which I didn’t know anything about.  There was no photo on the package, so I imagined big vibrant blooms giving colorful accent to the shady areas beside our house.
I bought the package, and planted the roots in pots in the green house.  They all grew and when it was warm enough outside, I transplanted the plants into some of the shady garden spots next to the house.  Time passed.
Well, the shade-loving flowering plant has finally presented to the world it’s bloom, and what a disappointment.  I must admit it is a whole lot less than I expected.  It is that washed out pinkish spot in the photo (above)  I guess anyone who has done any gardening knows the feeling when reality finally replaces imagination.

In the photo below you can see what the bloom looks like this summer.  Although the Astilbe still is a wimpy looking plant, it has managed to stay alive for 4 years and I must confess, that at least this year it produced a bloom that is at least noticeable, when one walked passed the small shade garden in the corner of our house.


I am still in hopes that it will continue to survive and strengthen, and perhaps eventually become a more dominant feature in the shade garden. 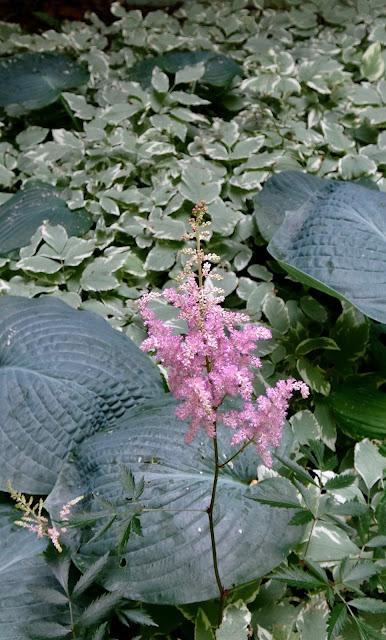