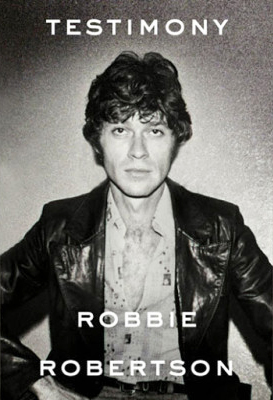 Testimony is the autobiography of a Robbie Robertson, the Canadian who became famous as the lead guitarist of The Band.  Robbie grew up in Toronto and on the Six Nations Reserve in Ontario. Dolly, as his mother was called, was a First Nations woman and his other parent was a man named Jim Roberson. Their marriage fell apart when Robbie was about eight, due to Jim's increased drinking and domestic violence.
Robbie then lived with his mother and was shocked when she told him that Jim really wasn't his actual father, his real father had been a personable Jewish man, with a bit of a shady side, who was now dead.  Robbie met and loved his newly found Jewish uncles and soon discovered they were involved in organized crime.
Robbie got his first guitar at the age of ten and with a lot of practice became good at playing it. He was in some local bands and when they opened for Ronnie Hawkins, an early famous rock and roller from Arkansas, his talent was recognized and Robbie was offered a job in "The Hawks", Ronnie Hawkin's band. So at the age of just 16, Robbie boarded a train in Toronto and made the trip south to Arkansas.
Playing in "The Hawks," Robertson's musical talents were nurtured to maturity.  Rock and roll was still in its infancy, but was growing fast.  Robbie's best friend in the band was Levon Helm a southern boy just a year or two older, who was the drummer. Bit by bit, the other original members of The Hawks quit and were replaced with Canadian musicians closer to Robbie's age.
The Hawks toured with Ronnie Hawkins throughout the southern US and Ontario, and the band began to gel. Things began to fall apart between the band and Hawkins and they parted.  New opportunities opened for The Hawks when Bob Dylan abandoned folk music for Rock and Roll and asked the Hawks to be his backup band when he toured the US and Europe.
This was a test of fire because most of Dylan's fans hated his change to Rock and Roll, and the entire tour was met with insults, booing, and bad press.  Dylan persisted and the Hawks stuck with him.  Eventually Dylan and his band won over the fans and things turned around.
During the slack time when Dylan was recovering from a motorcycle accident, Robbie and the band ended up in Woodstock, New York.  They stayed in  a big ugly pink house where they lived and set up a practice area in the basement, there they played, wrote songs, and experimented with music. A unique sound evolved in the band.
They released the album "Music From Big Pink" which made a huge impact on the music industry.  Having an album forced them to have a name, and since everyone in the neighborhood always just referred to them as "the band" that is the name they chose for themselves.  That was also the name of their second album that was released in 1969 that elevated them to super star status.
The book gives an unparalleled view of the usually unseen evolution of the music industry during the rise of rock from the mid-1950's to the late 1970's when The Band disbanded with their famous goodbye performance with all their famous musical friends called "The Last Waltz". The book not only tells a lot of very interesting stories of “life on the road” and the interactions between Robertson and the musical stars of the time, but also Robertson’s struggles to keep his fellow band members focused when wealth and fame hit them.
This book will be of special interest to those who grew up with, loved, and followed the music of the 1960’s and 70’s.  After I finished reading, I listened to The Last Waltz album again, remembering all of the details from the book about the songs and the performance.
You can see my paintings at:  www.davidmarchant.ca