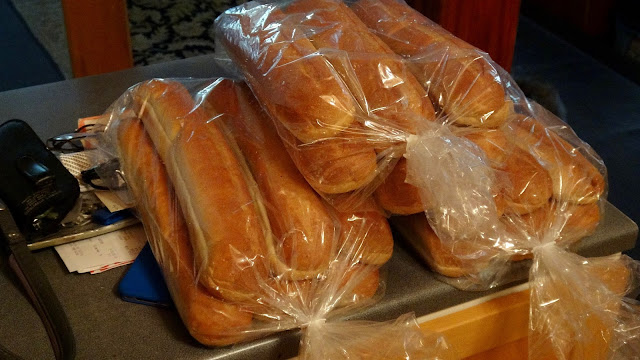 Way back on March 26th, 2013 I wrote a blog about salvaging items from wrecks along the highway. Well it has happened again, and instead of re-plowing over ground I have already covered, I am just going to cut and paste some of what I blogged then:

I have sometimes read of isolated communities along dangerous rocky shorelines, that benefit from the ships that occasionally crash into those rocks.  Word quickly scatters through the community, and the residents rush to the shore to salvage the items from the ship that are washed to the shore by the waves.  I have often thought that McBride is similar to those sea coast communities.
The Robson Valley offers no  dangerous seacoast, but McBride does sometimes benefit from the dangerous highway that winds through the mountainous terrain.  During the time I have lived here, I have often heard of wrecked transport trucks, or freight trains that have lost their loads, and those loads were often salvaged by local people.
Living, as we do, away from town, and the quick communication network of local gossip, we rarely benefit from these accidents.  Things happen fast.  I do still have a couple pieces of thick watercolor-like paper that was given to me, that had been in some overturned truck, but it was so long ago, I have forgotten the details.  I have had it for decades now, and still haven’t figured out what I could do with it.
When I was building my house, I was very regretful, about failing to hear sooner about an overturned truck carrying building lumber.  I don’t remember if that was a legitimate “salvage” or not; quite often the spills end up scattered, down mountain slopes, and are not really worth the effort of insurance companies to collect, so they are left for local people to pick up.

This latest bit of salvage from a truck that was wrecked are the foot-long buns you can see in the photo.  When Joan came home from the farmer’s market on Friday, she had three packages of the buns and said they were the result of a highway accident and there was a table at the market giving away a huge amount of them.  You could take as many as you wanted.
Its alway hard to pass up free stuff, and I am sure it was hard for Joan to limit herself to just three bags of the buns, but we don’t have much available freezer space at this time.