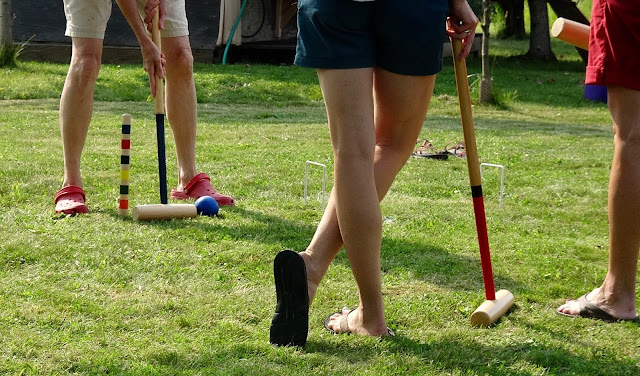 It seems a lot of families in the Robson Valley have been having reunions lately.  Our friends Jim and Abbie, were having one and invited Joan and I over for the afternoon.  Some of their relatives we had met before, but we were introduced to some new ones.  We visited, ate wonderful tacos, played with the kids, and had a really enjoyable time.  What was unexpected was the croquet tournament.
Jim had manicured the playing surface on the lawn and had all the posts and wickets laid out.  The tournament consisted of two games, with the top three winners of each, meeting for a third contest which would decide the grand champion.  It had all of the set up of a serious undertaking, complete with trophies (photo below)
In my youth we sometimes played croquet at with friends and relatives, but I very rarely played the game much over the intervening decades.   Last year on one of our visits to Jim and Abbie’s, Joan and I were coerced  into a croquet match and I did pretty well, despite my lack of playing the game for  so many years.  I trusted that this year I would be able to maintain some un-embarrassing status during this tournament.  Unfortunately that assessment did not stand up when my ball just wouldn’t go where I wanted to hit it.  I came in dead last.
Despite the trophies and mock-seriousness of the game, my lack of croquet prowess did not detour me from all the other enjoyable activities of the afternoon.  Luckily, I hadn’t spent much time considering where I would put the big trophy if I had won. 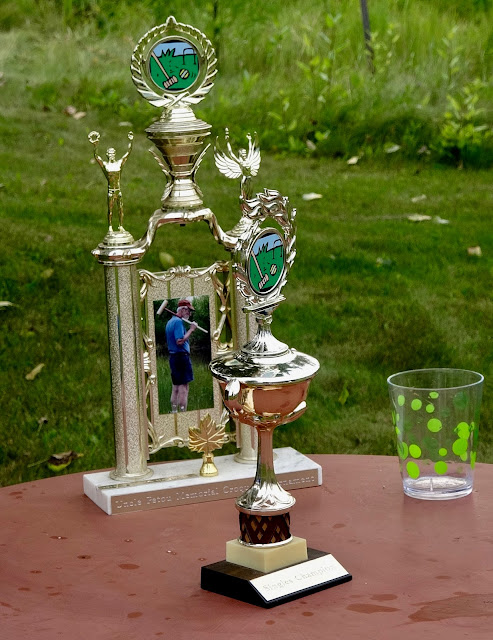