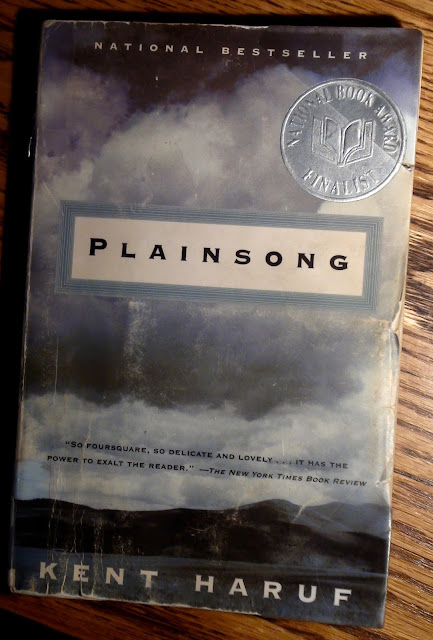 I first heard about the book Plainsong on the jacket of another book.  It favorably compared the novel inside the jacket, to Lonesome Dove and Plainsong.  Years ago, I had been hesitant about reading  Lonesome Dove, thinking it was some shallow, action packed western, but I found it very enjoyable, and a very memorable book.  I especially like the characters in the book.  If Plainsong was referenced along with Lonesome Dove, I wanted to read it.  I went down to the library, found it, and started reading.  It met my expectations.

Plainsong  by Kent Haruf
When I first read the title I assumed it referred to some feeling caused by wind blowing across the prairies, but it refers to a simple unadorned melody.  "Simple" and "unadorned" certainly is a good way to describe the writing in this novel, which takes place on the plains of Colorado.
The book follows several characters, all of which are experiencing major changes in their lives in the small isolated town of Holt, Colorado, and the humanity in which they deal with these changes.  Victoria, a seventeen year old high school student, faces the biggest change. Naively, she finds herself pregnant, and upon hearing the news, her uncaring mother kicks her out of the house for good.
Guthrie, a high school teacher, and his two young boys are left without wife and mother when she moves out, no longer able to deal with her life and marriage.  The most memorable characters in the novel are the McPerson brothers, two older men without social skills, who have lived together since adolescence, running a cattle farm, after their their parent's were killed in an accident. Their solitary lives are suddenly changed when they are asked to provide shelter for someone in need.
Although unadorned and simple in its storytelling, this is a wonderful and touching novel. Rich in humanity with realistic characters and dialogue. This short little book has become one of my favorites.