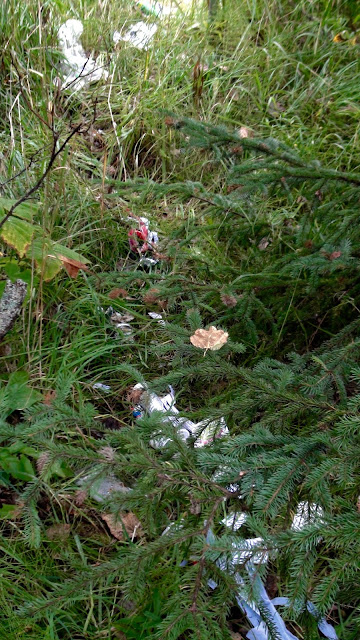 Yesterday I was in the garage and I noticed that the apples I had picked from the apple tree in our yard, that had been in a shallow basket, were sprawled out across the floor.  I figured a squirrel must have gotten in and knocked the basket over.  A few of the apples were half eaten.
I had picked the tree clean because usually in the fall bears come for the apples and end up thrashing the tree.  I stored the collected apples in the garage to keep them safe.
I then noticed that our plastic garbage can, that was also in the garage for the same reason, had been overturned and was laying, lid off and empty, on the floor.
I asked Joan, “Didn’t we have a bag of garbage in the can?”  She also thought we did, but there was no full bag of garbage in the garage to be seen, so I thought we were mistaken.
Early this morning Joan yelled to me, “There is a cat fight out in the woods.”  (She had earlier let Lucifer, our cat, out to galavant.)
We both went outside and called, “Here, Kitty, Kitty, Kitty, “ which is what we usually do in such cases.  Lucifer doesn’t come immediately, because of the dangerous situation she is in, but shortly thereafter, she does return.
I went back in the house, but Joan, who was more concerned, stayed out and went to look  for Lucifer.  Then she came in and told me she had solved the mystery of the missing garbage-- it was spread all along a path in the woods.
It seemed like something bigger than a squirrel had been in our garage, it also seemed like the work of a bear.  I then remembered that the other day I had left the door to the garage open for most of the day.   Had a bear gone in the garage, checked things out, and then dragged the garbage bag out into the woods?  It seemed unlikely, but I couldn’t think of any other plausible scenario.
Lucifer came home, and after breakfast I went out to look at the trail of garbage and investigate.  Sure enough there was a definite trail of trash scattered along a path leading into the bush.  I had taken a bag along and picked up the pieces as I walked.  Then I came to a big splat of bear poop in the middle of the line of trash, so that pretty much confirmed to me who the culprit in our garage had been.
I am glad that Joan or I hadn’t walked into the garage while the bear was checking things out and from now on, I am going to make sure the door is latched every time I leave the garage.