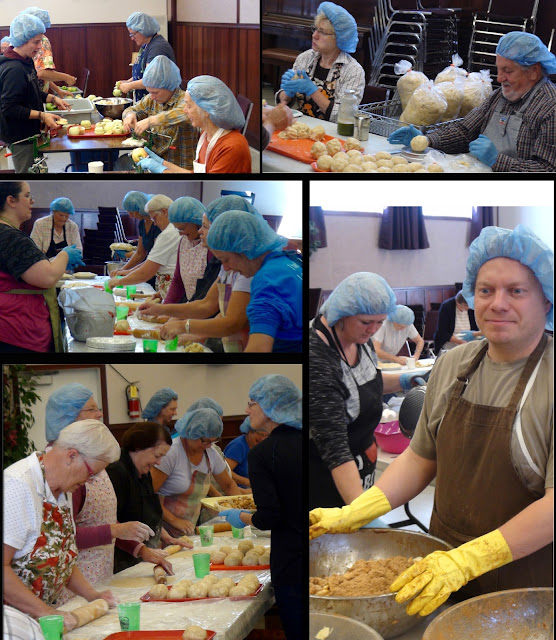 Yesterday was the annual apple pie making day for the McBride Library and Museum, who sell the pies to raise funds for the new building.  Scores of volunteers spent the day, peeling apples, slicing apples, mixing apples, measuring dough, rolling dough, constructing pies, and packaging pies for sale.  Henry Ford would approve of our apple pie assembly line.
I spent most of the day frustrated at my job of peeling and slicing apples.  Last year the little peeling-slicing-coring machine worked well with the green apples.  This year I was on the table doing red apples which are softer, and the machine just wasn’t working for me.  Apples would slip on the prongs that were supposed to hold them causing the machine to jam and me to take them off, peel, slice, and core them by hand.  Finally I just gave up on the machine totally and just used a paring knife.
Apple pie making day is always a big social event.  I talked to neighbors and acquaintances, and caught up on all the local news.  I think over 500 apple pies were produced.

Check out my painting:  www.davidmarchant.ca