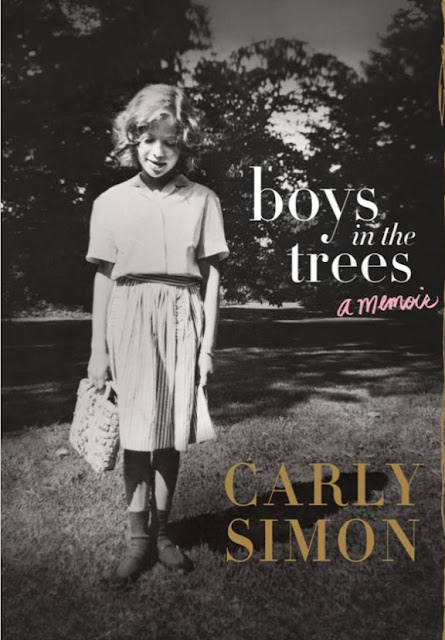 I have been listening to a lot of Carly Simon music lately.  I had never owned any of her albums, but always liked her songs when I heard them on the radio.  I recently finished reading her memoir, Boys in the Trees and that made me want to explore her music more.  Here is a review I did on the book.

Boys in the Trees, a memoir  by Carly Simon
I decided to make a departure from all the fiction I generally read and try a nonfiction book for a change. I went online to the library's OverDrive site and while I browsed through the section of nonfiction books, this book about Carly Simon caught my eye so I downloaded it.
The songs and the vibrant music scene of the 1960's and 1970's have always been a passion so I was curious to see what someone, like Carly Simon, who lived in the midst of it, had to say about it. I didn't know a whole lot about Carly, but the things I did know we're pretty interesting.
I knew her parents were fairly well off (her father was the creator of the Simon & Schuster publishing empire) and that as a child Carly was taught baseball by Jackie Robinson, while he was staying with her family after all of their neighbors conspired to prevent him from buying a house in the neighborhood.  I also knew she married James Taylor, one of my favorite singer/songwriters.  And of course I knew Carly to be a very creative singer/songwriter herself, but didn't know much more about her life.
Carly's childhood was not an easy one, despite her well positioned family. After two daughters, they were eagerly awaiting a son, but got another girl.  Since they couldn't use the planned boy name "Carl," they added a "Y" to the end and named their daughter “Carly”.  Her two lovely older sisters were adored and she was largely ignored and felt unloved by her parents, causing her to develop an inferiority complex and this was re-enforced as a child because she stuttered badly.
She could sing, and during folk revival of the early 1960's she and a sister formed a duo and they played gigs in New York's City's Folk Clubs as the "Simon Sisters".  This set her up for the career as a singer/songwriter.
One of the things I found most interesting about Carly's life was all of the other popular singers and stars of the era that she met and knew: Sean Connery, Mick Jagger, Bob Dylan, Paul and Linda McCartney, The Band, Kris Kristofferson, Cat Stevens, and many many more are a few of the names that pop up in the memoir.  Parts of the book are like a gossip column as she tells about what they did, but gossip or not, I found it interesting.
One of the memorable stories she tells is about her fling with Warren Beatty, who she describes as an outrageously beautiful man who no woman could resist, but also a man that knew his power over women and exploited it with skill. At one point in their relationship, he told her he couldn't make it to her apartment until after 11:00 pm because of business and had to leave before 5:00 am the next morning.
He did arrive and leave at those times, spending the night. The following day Carly had an appointment with her psychiatrist and during the session told him about her night with Warren. This somewhat disturbed the doctor who then confessed that earlier that morning he had a session with another female patient who had also told him she had just spent the night with Warren Beatty.
Beatty was exposed and was exposed further later on when it became known that Carly's best selling song, "You're So Vain" was based on Warren Beatty.
I was of course very interested in finding out about her and James Taylor, and must confess that what she said certainly took some of the shine off of one of my musical favorites.  He, like Carly, carried a lot of emotional baggage.  Living the life of a celebrity and entertainer with being on the road and all the temptations of stardom might sound glamorous, but it destroyed not only their marriage, but many of others.
This book is full of interesting stories that touch on the everyday lives of really well known celebrities, which I enjoyed reading about, but at times, Carly gave information that seemed a bit too personal--things that I really didn't need to know.
Boys in the Trees is a light, easy, and entertaining read.

If you would like to see my paintings visit:  www.davidmarchant.ca