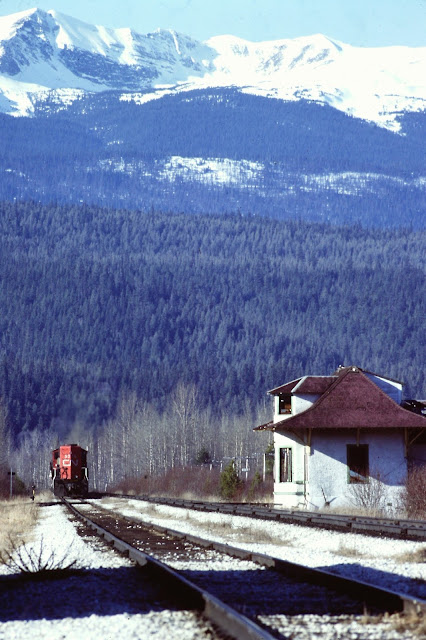 The interior of BC was built and settled on the back of the railroads.  The railroad established repair shops, camps and stations at fixed points along the line.  The bigger repair centers and stations attracted people and became villages and cities (McBride was a divisional center and featured a big railway repair shop and turntable),  The smaller stations with the smaller populations struggled to exist.
As the railroads changed, most of these smaller stations were no longer needed and in the 1970’s and 80’s, CN Rail burned them down, often without telling the people that lived in the area.  The photo above shows the station that once stood at Goat River.  I happened across it one day while working in the area for the BC Forest Service.  Months later I had heard that CN had burned it down to relieve themselves of the responsibility and liability of the unused building.
Below, is the station at Avola, BC.  One morning while we lived there, we saw smoke and discovered that the building had been purposely burned down.
Luckily, the Village of McBride was able to save the railway station that sits at the end of Main Street.  That classic looking railway station still functions as a railroad station and also as a vibrant restaurant, and gallery.