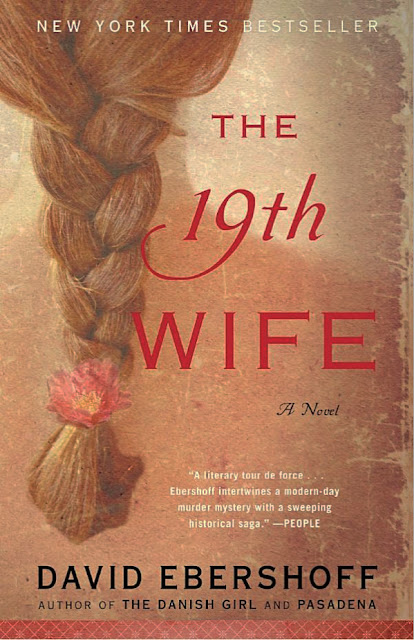 The 19th Wife by David Ebershoff (Checked out as an eBook from McBride's Library OverDrive site).
I found this to be a really fascinating novel which deals with Mormon Church history and its over arching practice of plural marriage. It has two storylines that interweave throughout the book, one is historically based and follows the life of Ann Eliza Young, who was wife number 19 (really about number 50) of Brigham Young, the so called "Prophet" of the Latter Day Saints and in following her life reveals the early history of the Mormon Church.
The novel paints Brigham Young as a brilliant organizer, but a dictatorial "Prophet", who tells his followers God has decreed they all must practice plural marriage.  He uses his power to establish a harem of young women for himself. Ann Eliza, who disliked Brigham Young, is manipulated by his power over her family, to become one of his wives.
After years of this marriage, she secretly escapes Utah and in 1873, she  made nationwide news when she divorced Brigham Young and then became an activist who wrote books and gave lectures in an attempt to end the practice of plural marriage.
The other storyline of the novel happens in the present day and follows Jordan Scott, who at the age of 14 was driven out to a highway in Utah and dropped off by his mother at the side of the road in the darkness, because, as a member of the "Firsts", (a polygamist offshoot of the Mormon Church) she was told by the "Prophet" her son was excommunicated and for her own salvation, he had to be abandoned.  (Getting rid of adolescent males is a practice common among polygamist sects to insure an abundant supply of young females for the older men.)
Jordan, now 27 is on the Internet in a Colorado library, reading the news from his childhood community, when he discovers an article that said his mother, the 19th wife of his father, is in prison, for the cold blooded murder of his father with a handgun.  Jordan packs his bags, puts his dog in the van, and drives off to Utah, to visit his mother in prison and see if he can somehow help her.
His mother refuses to talk about her husband's death, and remains steadfast about her faith, but insists she loved her husband and didn't kill him.  Jordan then tries to discover what actually happened.  He quietly snoops around the hostile and closed community of the "Firsts" talking to other excommunicated or escaped members of the sect, in an attempt to glean information that might help clear his mother.
I found "The 19th Wife" fascinating , both in the history, facts, and curiosities (the strange religious beliefs, sacred underwear, etc) of the Mormon Church, and the modern day storyline which follows Jordan as he tries to learn facts from his childhood community of Firsts, in his attempts to free his mother.