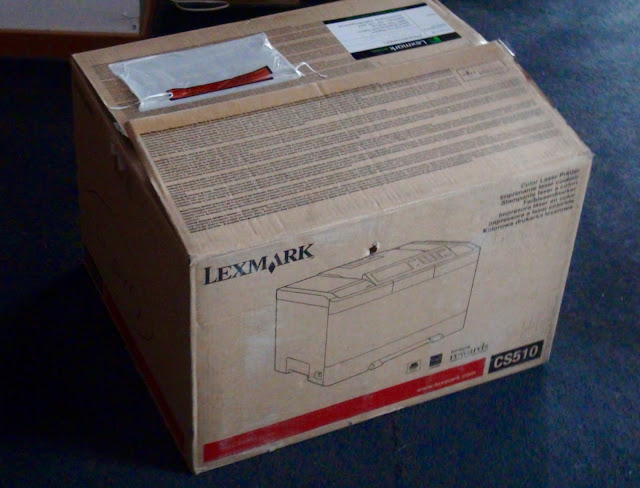 In my blog of December 9th I wrote about having two new printers, both with the same problem.  If you remember, I was told that a technician was going to be sent from Prince George (135 miles, 217 km) away to fix it.  I am still waiting for that technician, but I thought I should hang on to both printers until he comes, but then on Tuesday, I got a call from somewhere in the States, and the Lexmark guy wanted to know when I was going to send my first printer back.
The call made me think I should probably just do it since it was clogging up the room.  So I told him that I would deal with it right away.  I asked him if I should take it down to the Post Office in McBride, because that is where it originally arrived, and explained that we didn’t have a UPS presence in our little far away village.  He said just follow the directions in the second printer’s box.
Those directions told me to call a phone number and make arrangements for pick up at my home.  I called the number and made arrangements to have it picked up.  I asked the UPS person on the line, if it would really be picked up at my home, because in this little place we rarely get pick and delivery at home, and usually have to take the parcel somewhere in town.  He told me it would be picked up between 9:00 and 1:00 the next day (Wednesday) at our home.
“Okay,” I replied and hung up.  A few minutes later, I realized that the free Christmas Dinner for Seniors which we were planning to attend was happening on Weds. at noon, so I called the UPS number back to tell them, but got another person who seemed not to be able to put that information into my appointment.
“If you miss the pickup, just call and have it picked up the following day.”
“Okay,” I replied.
Of course on Wednesday, the pick up of my printer was in the forefront of my mind.  I had arranged to have the car worked on in McBride, which would require both Joan and I to be away from the house as we took the car in and brought me back, but making sure that we would be home by 9:00, we took the car into town at 8:00, returned home and waited for the courier.
The courier didn’t arrive, and it was time to go to the Christmas Dinner, so I just thought, well if he comes while we were gone, I will just have to have it picked up tomorrow.  We went to the dinner, ate our fill, and returned home.  I noticed from the lack of fresh tire tracks on the driveway that the courier had not visited our house in our absence.
When I got back in the house, I noticed there was a message on the answering machine.  It was the courier speaking at a very low volume, but I could make out that I was supposed to take the printer to the Post Office and it would be picked up there.  Tired of messing around, I decided to do it immediately and get the extra printer off of my hands.
I put the heavy box into the car and drove it down to the post office, and carried it in.  I told Wendy behind the counter about what I was told.  She had no idea what I was talking about and said that they had no UPS that picked things up there, and Purolator (another courier) wasn’t really part of the post office either.  When I told her that that was what I was told to do, feeling sympathy for me, she said, “Just leave it here and if nothing happens tomorrow I will call and you can pick it back up.”  Happy to have the printer off of my hands I drove home.
Back home I called the number left on the answering machine and told the person that I had left the box at the Post Office, Okay, he said.
The next morning I got a call from UPS asking me about the printer.  I told them I had taken it down to the Post Office to be picked up.  I was then told that I needed a special label for Purolator on the box.  He ask me what the dimensions and weight of the box was.  When I answered that I didn’t know, he said I should find out and call him back then he would make up the special label and mail it to me and I should put it on the box and it would be picked up.
I was getting pretty mad at this point.  I called the Post Office to find out if they could just measure the box and weigh it for me or whether I had to come down and pick it up again.  I called and the friendly Post Mistress said, “Oh, they already picked it up and took it away.”


So I only hope it gets where it is supposed to go.

My paintings:  www.davidmarchant.ca
Posted by Life in BC's Robson Valley at 10:59