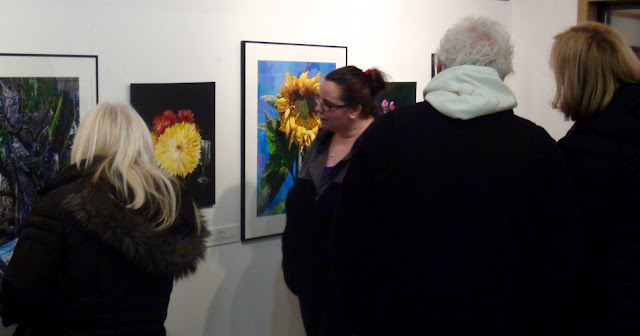 I love to have my paintings shown, so I was overjoyed a year ago when I was told that there was going to be a show at the McBride Library featuring the works of painters who sold at the WhistleStop Gallery.   Then about 4 months later I was told that the show was suddenly not about the works of the painters, but about a “theme”.  The theme was “Seeds of Inspiration” which was supposed to help celebrate the 100th anniversary of McBride’s Farmer’s Institute, an organization for local farmers.
I shook my head in dismay.  Themed shows are so false, and force the artist try to give meaning to their paintings that the paintings really don’t have.
Since the theme was agriculture and I certainly didn’t have the time (or desire) to paint something new about farming, I was forced to look through my existing works and try to see if I could make any of them fit the theme.  I did have “Sunflower” (you can see it in the photo), “Morning Cloud” (featuring cows in a pasture), and “Peppers”, all older works.
I was already peeved at the fact that the show was now supposed to celebrate the Farmer’s Institute, when I read in the local paper that member’s of the Institute were upset that the BC government had proposed making the Ancient Forest (an area of giant old cedars, in a very rare inland rainforest) a Class A Provincial Park.  When I heard about their opposition, I was ready to just withdraw from the show, since I didn’t want to celebrate that type of rural conservative mentality.
I did come up with a compromise.  Since I was told during my initial complaining about having a themed show that “Seeds of Inspiration” could be stretched to mean anything (“Whatever inspires you”), I put my painting “Pillar of the Earth” (or “Cedar”) whose subject is one of the giant cedars growing in the Ancient Forest, into the show.  It was an honest response since the ancient old gnarled cedar did inspire me.
We had a nice turnout at the opening on Friday and the show will remain on display at the McBride Library though December.

You can see all of my paintings at:  www.davidmarchant.ca