A Tale of Two Printers 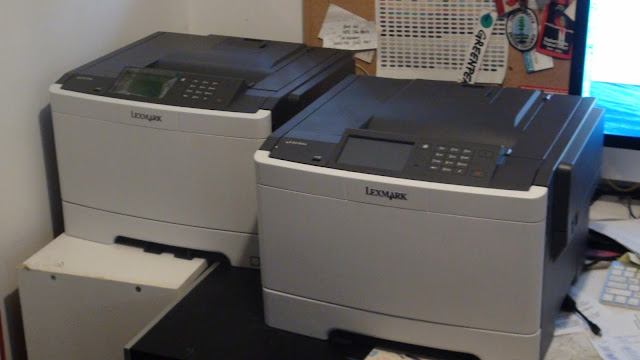 Back on my Nov. 29th blog, I told you about the hassle of buying a brand new printer Lexmark CS510 printer and the frustration I felt when it didn’t print properly, not centering the page, skewing things to the bottom where it was cut off by the bottom edge of the paper.  Joan, the Lexmark technician I talked to in the Philippines had me try several things to correct the problem, but in the end, the problem was not solved.  She even forgot the time difference and called me at 7:00 AM to try something else.  (I told her it was too early in the morning for me to get out of bed to mess with it.)
In the end, Lexmark sent me a brand new printer.  When it arrived I just used the existing cable, still plugged in to my computer, and tried to print something.  I kept getting the error message “Printer is not connected.”  Thinking that maybe something had gone wrong with the ethernet cable, I tried several different ones, but the printer failed to get the message from my computer.
I got back on the phone and this time talked to Patrick, also in the Philippines.  He had me do a couple of things on the printer and on my Mac and finally the two of them were communicating.  I tried to print something out, and to my dismay discovered exactly the same problem with the new printer--the document didn’t center vertically, there was a blank space on the top of the page, while the text was cut off on the bottom.   Now I had two new printers that didn’t work.
Patrick had me try several other things to try to solve the problem, he even wanted to send me a third new printer, but I refused, saying if the first two had the same problem, I didn’t think the third would be any different.  Patrick transferred me to another technician, who also failed to solve the problem and he told me that a technician would be sent to my house to fix the printer.
I found this rather unbelievable since I live in a really remote village that is 135 miles (217km) from a moderate sized city (Prince George, BC).  I said it was a long drive on a dangerous highway, especially in the winter, but the technician said that they would send someone, so I said, “Okay.”
I packed up the first printer and supposedly some courier will pick it up today, (something I also had doubts about, since in our little village we usually have to deliver things to be couriered to some location in McBride, but we’ll see.)
This whole printer thing has been a real pain.  The sections of things that are printed are of good quality, I just wish they were centered.  The Lexmark technicians have been friendly and eager to help, but the problem seems to be something unknown.  I have been impressed with the lengths Lexmark has gone to in trying to solve my problem, and I hope a solution can soon be found so I can get back to my ordinary life, a life spent not thinking about my printer.