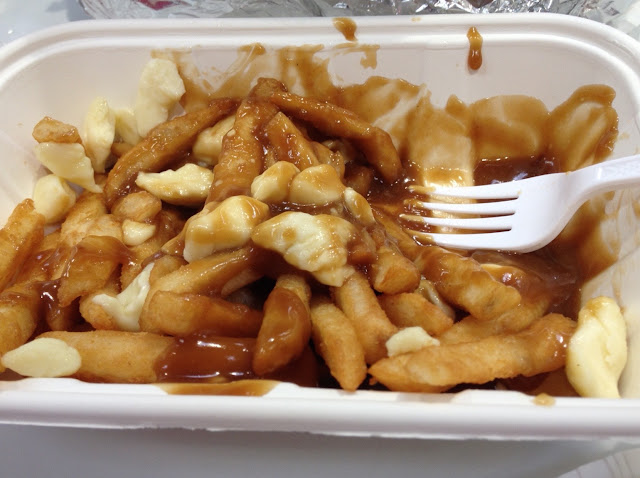 Many countries are known for their cuisine.  Italy has its pasta, France has its wine and cheeses, and the US has its hot dogs and burgers.  Well Canada has its traditional foods too.  Canadian back bacon is probably its best known edible, but surely poutine (pronounced “poo teen”) while relatively unknown, is probably claimed by most Canadians as our most unique “Canadian food”.
Poutine which was created in Quebec is a conglomeration of French fries and cheese curds, all covered over with gravy.  It is a food I have successfully avoided for decades, but lately my defenses have broken down.
Usually when we go to Prince George for shopping we eat at Costco, generally having one of their turkey-provolone sandwiches.  But a few weeks ago we were there and in need of a bigger meal, Joan, who sometimes indulges in poutine, suggested we add a serving of that to our turkey sandwiches.  We did, and I admit it tasted really good.  So now it seems every time we eat at Costco we also have poutine.
As you might expect poutine is not the healthiest food on the menu,  but I can rationalize eating it once a month or so, after all, its our national dish.