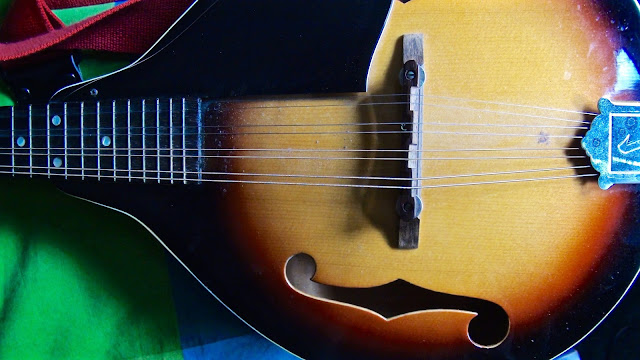 The little hamlet of Dunster, BC is celebrating its 100th Anniversary Reunion this weekend.  Last March, I was asked if our jam session would play at one of the events.  We jam to have fun just playing music, we really aren’t a “group”, but I said I would ask our members and a few of them said they would do it.
Yesterday was the day it happened, and I confess I was a bit nervous about “performing” because there were only three of us that I knew would be there:  Len on bass, Eunice with her keyboard, and me, mandolin and guitar (and main singer).  Al did show up with his African drum, so that gave us four.
They had a little tent set up beside the eating area, to provide us with some shade from the midday sun.  Singing and playing in public is not something I have done in decades.  It felt pretty strange to be there, playing and singing.  When we started I got the thought, “Why am I standing here in front of these people singing?”, but I shouldn’t have worried because we were just background music.  Everyone that came to the reunion were there to visit with friends and acquaintances they hadn’t seen for a long time, so we were not the focus.
We played hobo songs, bluegrass songs, Tennessee songs, our regular fare.  It was different playing outside, difficult to hear each other, and fighting with the wind that blew our lyric sheets around.
I had put out the word that we were just a jam session and we welcomed anyone who wanted to join in, but we didn’t have but one taker.  When we started our second “set” we were joined by Lelani (voice and guitar) who often comes to our jam,  but then an unknown guitar slinger from the audience joined us.  He used my electric guitar and was quite good at thinking on his feet and doing leads.
I came home hoarse and exhausted and without any signed contracts for a musical career.  I am glad that is over, it will be nice just to get back to playing in the McBride Library Annex, with no pressure, just easy going musical fun.

My paintings can be viewed at:  www.davidmarchant.ca