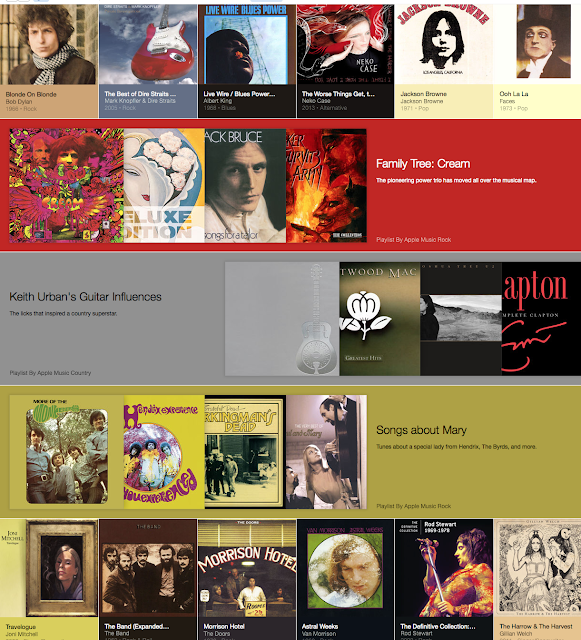 Music streaming on the internet has been around for years, but I never did try it on Spotify or other streaming services, then Apple announced its Apple Music with a free three month tryout, and I couldn’t resist.  I have been in the Apple camp since we bought our first computer, and so it didn’t take much to push me into the tryout.
Wow, I like it.
Having passionately followed music since my adolescence, and always felt financially restricted because of my income and the high cost of albums (real vinyl albums, remember them), and later cassettes, and CD’s.   I always had to pick carefully what music I wanted to buy.  There were many  albums I was tempted with, but could never justify my curiosity enough to lay out the money.
Now with these streaming services those restrictions no longer effect me.  The Apple Music service will cost $10/month once they start charging.  I can rationalize that, when I consider that to buy one  digital copy of one album would cost me at least $10.  With the streaming, I can listen to any album I want, as many times as I want without limit.  It is an amazing thing considering just how much music iTunes has out there.
I have have been using it for a few weeks, and have really enjoyed the expanse of music now open to me.  I listened to old favorites I hadn’t heard for 40-50 years (The Left Banke was one group I enjoyed rediscovering).  I have ventured into groups I have always wondered about (I really like Crazy Horse, (without Neil Young), and I enjoyed dipping deeper into the Black Keys)
Apple has created programmed playlists which combines related music.  In a playlist called “Sad Bluegrass Songs” I discovered an extremely sappy song called, “Put My Little Shoes Away”  which was written way back in the 1870’s but done up by someone called Chris Brashear.  The lyrics are about a little dying boy who tells his mother to save the shoes he got from Santa for his little brother, but I got really hooked on the melody and arrangement and have taken the song to our jam session.
Who knows where all this musical freedom will take me, but given the immense scope of how much music is now available to me, I will happily pay the monthly fee.

Visit www.davidmarchant.ca to see my paintings.