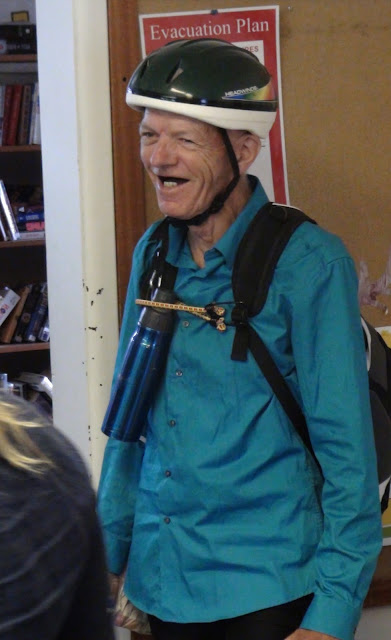 Vern Pawloske has always been one of the Robson Valley’s unique characters.  He has lived his entire life here, running the small off-the-grid family farm with his mother.  He grew up fairly isolated without experiencing those cultural things most of us grew up with.  After the death of his mother, his life changed drastically, suddenly he could be seen everywhere in McBride.  He volunteered and worked on community endeavors, and took part in social events for the first time.
A few years ago at the library, he learned how to use the computer and how to send emails.  He bought himself a digital camera and started taking photos, last winter he even bought himself a smart phone, and now he no longer has to go to a neighbor’s house to make a phone call.
During the summer months he lets the insurance on his truck lapse and starts depending on a bicycle, often making the 20 km  (12 mile) round trip to McBride, several times a day, so I knew he was no slouch.  When we were on hikes in the mountains and someone would be pointed out way up ahead, Vern would take off and be the first one on the peak.
It was last fall when I heard Vern first talk about his plan to bike from his home (just east of McBride) to Mt. Robson, then hike up to Adolphous Lake and then bike back home all in one day.  The total distance for the biking and hiking is 200 km (124 miles), not to mention all the elevation he was going to have to deal with.  It sounded like a pretty crazy idea to me, but Vern seemed determined and told me he was going to do it this summer.
I thought he would let the idea drop over our long winter, but then heard Vern say that he was going to take pledges to raise money for the library.  This meant that the idea became public knowledge and I knew that it would be hard for Vern not to do it.
I worried about Vern and his big bike/hike.  When spring arrived and the roads cleared of snow, Vern started coming to town again on the bike, but not his fancy 27 speed, but his 3 wheeler so he could carry food and supplies home.  I thought he should be out building up endurance for his trip.  A couple of weeks ago I asked him if he had been hiking any mountains this year to prepared for his hike to Berg and Adolphous Lake, and he told me “No.”
Vern is not one of those exercise addicts that spends all of his time jogging and working out, he just keeps doing his normal life sort of things, and I am sure I was not the only one that worried about his daylong fundraising endeavor.  A couple of days before his trip I saw him walking down the sidewalk in McBride and tried to tell him not to feel that he had to do this at the expense of his health, if he started to experience problems, just stop I told him, don’t let the pressure to succeed cause you real physical problems.  Vern just told me that he could do it without any problems.
Sunday was the big day.  Vern got up at 2:00 AM, he was on his bike at 3:00 and was pedaling down Hwy 16 in the dark.  The route to Mt. Robson Park is not a level one.  That stretch of the highway is full of long hills and valleys.  He completed the 75 km bike to Mount Robson at 7:00.  He had to abandon his plan to bike part of the way up the trail because of a downed tree, so proceeded up the slopes of Mt Robson on foot.  I suspect he was just wearing his old running shoes like he always does on hikes.
The 20 something kilometer slog up to Berg Lake then on to Adolphous Lake is not an easy one.  I hiked up to Berg Lake in my younger years and my ankles were wobbly with exertion by the time I got there.  Vern talked to a lot of people he met along the trail and didn’t really look at what time it was when he got to Adolphous.  He snapped some photos to prove that he made it then started back down.
It was 10:00 at night when he finally got back home on his bike and was congratulated by some well-wishers.  His 20 hour ordeal had succeeded and Vern went to bed.  He was back up and ready for a new day at 6:00 AM on Monday morning.
Knowing what I know about the terrain Vern biked and hiked, I am astounded at what he accomplished in a single day.  It is an amazing feat.  I was happy to pay off my pledge to the library.
Oh, I forgot to mention, Vern had his 70th birthday last winter. 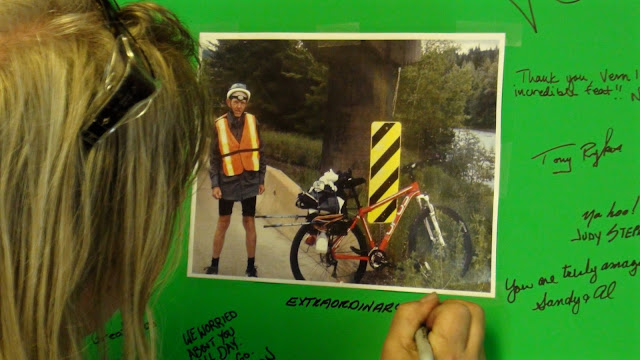