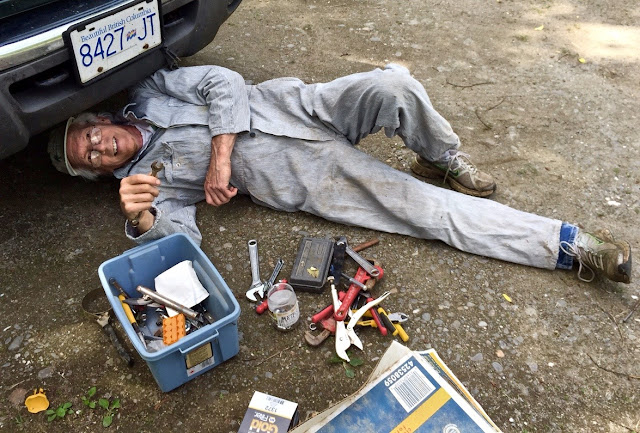 One thing I am really good at is the ability to put things off, especially those jobs that I really don’t enjoy doing.  One such unwelcome job is changing the oil in my truck.  Changing the oil is a really simple chore, all you have to do is unscrew a bolt, which lets the oil drain out, and unscrewing the oil filter then screwing on a new one, screwing the bolt back on, and pouring new oil back into the engine.
Changing the oil is a job that a lot of guys do, and many of them actually enjoy working around on a vehicle, but I am not one of them.  I don’t like lying on my back in a very confined dirty space, and I don’t  appreciate the feel of hot black oil running down my hand.   If we had one of those quick, drive-in, oil change garages anywhere close I would be happy to give them my business.
McBride does have a couple of garages, but they are all busy and you have to make appointments weeks in advance, so I change the oil myself.  Well, at least I decide I am going to do it myself, although usually quite a bit of time goes by before I actually make myself crawl under the truck.
I have been telling myself I should change the oil in my truck for about 3 years.  A year ago, while we were up in Prince George I did make myself go into an auto parts store and I bought an oil filter for the truck.  The oil filter got hidden behind the seat in truck for several months, and when I did discover it, it was mid-winter, and I wasn’t about to change the oil in the snow and cold, so I put the filter into my shop.
A week ago as I was looking around for something else, I came upon it and immediately felt guilty about not changing the oil a long time ago, and stoically resolved to do it.  As you can see from the photo I put on an old hat, some old coveralls, got my tools, and did it.
The task went relatively smoothly, except that I forgot to open the air vent on the my oil catching container which caused some oil to overflow onto the ground and some more to splash onto my hat when it belched out of the hole, but thankfully the job is now done and I won’t be forced to do it again for a year, (or two, or three).