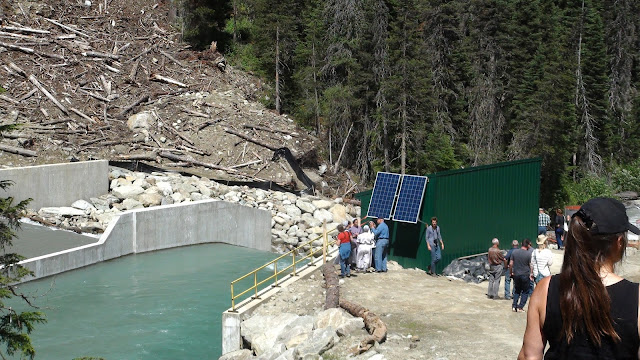 I am having a hard time putting into words just how impressed, on so many levels, I was today when I went on a tour of the Castle Creek Hydro Project.  It is an example of generating electricity without flooding valleys, or putting carbon into the atmosphere.  It is what is called a “Run of the River” generating site, where water is collected high on a mountain, channeled into a penstock or pipe, then is carried downhill by gravity where its pressure turns turbines which generates the power.
One thing that I was quite impressed with is that it is a local endeavor, created and built by local folks.  It was not some big company from far away that came in here with a lot of outside people and built it, it was friends and people I know, who live in our tiny isolated community that saw the possibility and struggled to overcome enormous obstacles to make it a reality.
It is often said of in the Robson Valley, “There are so many talented people who live here.” and considering that in this area there are only about 7-800 people, it is amazing the wide range of exceptional abilities that they possess.  Because I know many of the individuals involved, I am aware of just how important our environment is to them, and they kept protecting the environment and important consideration throughout the planning and construction of the project.
There was an enormous amount of planning that had to be done before construction could begin.  I think they said it all began 10 years ago.  Permits and all kind of environmental research had to be completed before permission from the province was given.  Working through the winter in the bush, collecting data, snowshoeing, camping out, wading in the icy water to calculate the winter flow of the water which had to be determined.  Layout of roads, penstock routes, everything had to be figured out.  One person jokingly said today, “a lot of old hippies had to pour through a lot of books.”
I can’t get over how difficult it must have been to complete this project.  It is situated way up Castle Creek, beyond what could be accessed by a logging road.  A new road had to be built through the bush and along the mountain slopes, big machines and equipment had to be brought in to create the infrastructure for the intake, penstock, and generating plant in the raw wilderness of the Castle Creek headwaters.  Concrete had to be made (and heated) as it was needed throughout the winter.  Luckily both gravel and sand was discovered along the site as the thing was being built.
I was aware of the project but didn’t realized that the scale of the thing and the difficulty of construction was so great.  The penstock is 48 inches (1.2m) in diameter and is 4.6 km (2.9 miles) in length.  It makes an elevation drop of 287m (940 ft).  It takes only 12% of the water in the river and that is returned back into the river at the bottom.
The sections of the fiberglass pipe which is used in the upper sections of the penstock were manufactured with all it’s turns and angles in Louisiana (a long way from BC), the lower sections had to be made of steel because of the increased pressure that occurs there.
The fiberglass portion had to be carefully buried and surrounded by protective sand.  One section is above ground where it crosses a ravine, and sits on top of an enormous I-beam that was once was part of a bridge in Vancouver (see photo below).  Every time there is a change of angle in the fiberglass penstock it had to be secured with a huge cement buttress to contain the pressure.  It is always so amazing to my simple mind just how complicated the engineering is on building things correctly.
More on Castle Mt. tomorrow. 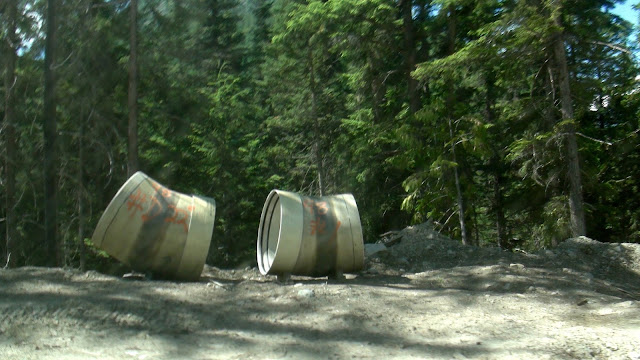 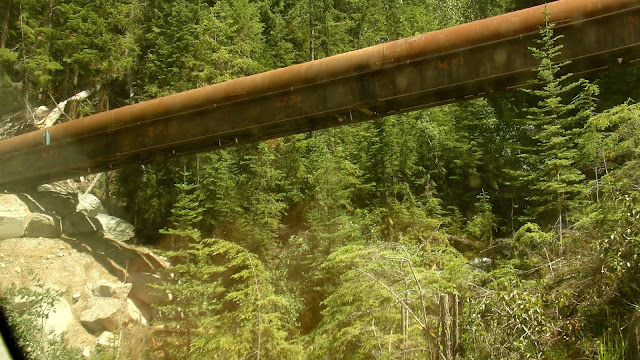