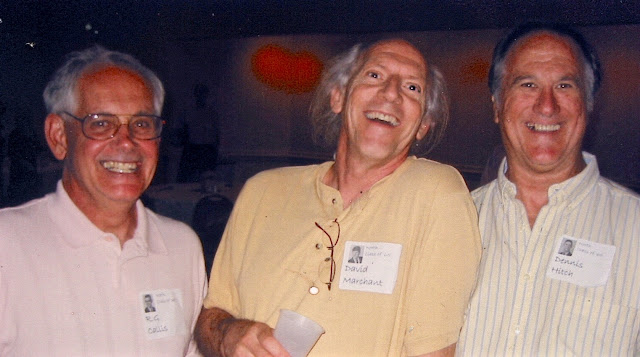 As a child, I overheard my “ancient” relatives talk about how all of their friends were dying.  To my young mind it seemed unbelievable that such circumstances would ever happen to me, but now that I have reached a similar age as those “ancient” relatives, I am experiencing the same distressing thing.  My old friends and acquaintances are passing on.
The photo above was taken and sent to me by Charles Wiley, an old elementary and high school friend.  It shows me surrounded with two classmates, RG Callis on the left and Dennis Hitch on the right.  The picture was taken at a high school reunion that I attended 10 years ago.
Dennis, another friend in both elementary and high school died a year ago.  Yesterday I heard that RG, who was waiting on an operation died.  I didn’t really know RG very well, he was an acquaintance and a friend to some of my friends, but I was re-acquainted with him at the reunion and looked forward to talking with him again at our upcoming reunion.  A couple of other really close friends will also not be attending because of their death.
I had heard RG was waiting for a transplant operation to save his life and just last week I sent him a post card wishing the best.  Yesterday, when I heard of his death I thought of this photo.  It is sobering to see it now, knowing the other two people in it have died.
While it is better than the alternative, getting older is no picnic.