Greggo At The Prince George Airport 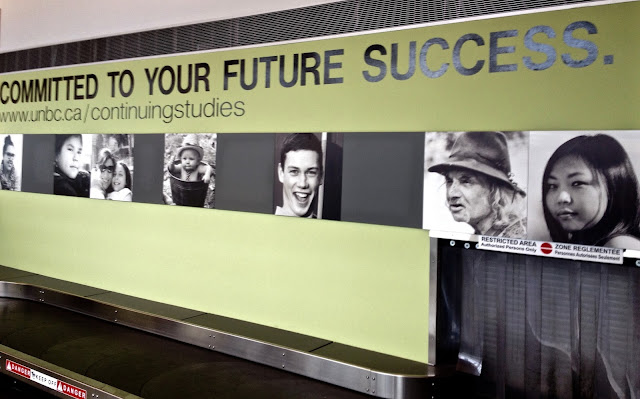 I was up at the Prince George Airport on Tuesday to pick up Joan, who was returning from her European trip.  It was good to see her finally walking toward the terminal building from the plane.  As we were waiting for her luggage to appear, she said, “I want to show you something.”
She walked me over to the secondary luggage arrival area and she told me to look at the photos that lined the wall.  In the past, when I have spent time in the airport waiting, I had looked the portraits which show a cross-section of Interior BC residents, but since most of the action always appears at the first luggage arrival area, I guess I never saw the photos in the neighboring section.
As I glanced down the row of photos, I was suddenly gobsmacked--there was the unmistakable face of Greggo, one of McBride’s unique and unforgettable characters.  I am sure most everyone in the Robson Valley knows who Greggo is, but for all you international readers, that is him second photo from the right.
Greggo is a trapper who lives out in the bush in a small cabin.  He spends most of his time living out there in the woods, without power or a vehicle, although he can frequently be seen talking to someone on the sidewalks or Post Office in McBride.
I must say, Greggo was the very last person I would have expected to have seen in the Prince George Airport, especially on an advertisement for continuing studies from the University of Northern British Columbia.  It does feel good knowing that when you arrive at the PG airport from some far off destination you will be welcomed with a familiar face from our little isolated mountain community .


My paintings can be seen at:  www.davidmarchant.ca
Posted by Life in BC's Robson Valley at 10:42