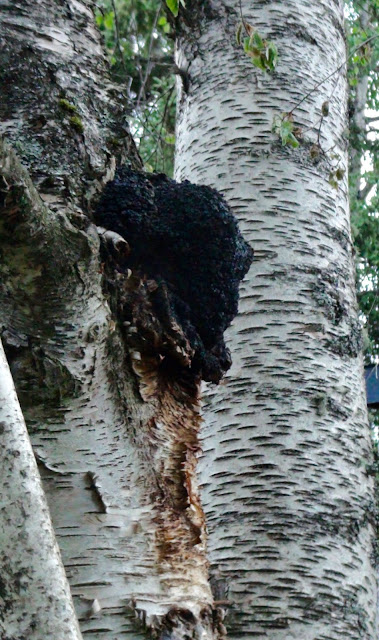 To read some of the things on the internet, the black ugly looking thing you see in the photo is a miracle substance.  It is called “Chaga” and is made into a tea and used as a folk medicine.  The Siberians called it “Gift from God” and “Mushroom of Immortality”, the Japanese referred to it as the “Diamond of the Forest” and the Chinese, “King of Plants”.  If you want to learn more, Google it, there is plenty of information out there.
I have been watching this black fungus on our birch tree since way back in the 1970’s when we bought the house.  It worried me because seeing a fungus on a tree indicates rot inside and the tree is right beside our house.  This black mass became a point of pride to me when I was working at for the BC Forest Service, after some mushroom experts came to our Forest District to research the variety of fungus which grew here.  I told them about this fungus on my birch tree and they had me collect a sample which they took back to Victoria with the information about where it was growing.
I learned more about the hard black fungus from Pernilla and Emma, the two Swedish girls that lived in McBride and wrote about it in their blog in January of 2014.  The two adventurous females went Chaga hunting, found some and made tea.  They talked about what a healthy drink it made, but Chaga didn’t look very appetizing source for tea to me, so I didn’t think much more about it.
This last weekend our friends the Swansons came over and I showed them our birch tree which is  now dying.  Abbie immediately spotted the Chaga and started raving about it and telling us about what a “hot” commodity it was with the health food community.  Now feel like I have a treasure growing right outside our front door.
I suspect that when I take the tree down in the fall, I will harvest the stuff, brew some Chaga up, and see if I live forever.

You can see all of my paintings at:  www.davidmarchant.ca