Cat in the Window 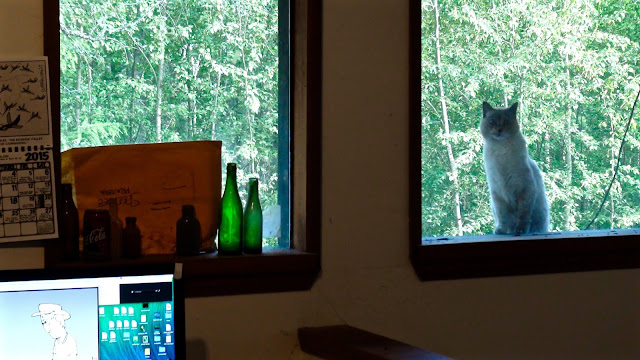 In the evening I was at my computer working on a cartoon, and suddenly I sensed movement off to my right.  I was Lucifer our cat, looking at me through the window.  Lucifer taught herself the trick of climbing up one of the support posts for our balcony, from there she can access the roof and look through the upstairs windows.
Normally, if she wants to come into the house she just nudges the door open with her head, (it doesn’t latch very well), but if she can’t get it open her next option is to climb up onto the roof try to draw our attention to her presence, so we will let her in.  If we are not around, or otherwise occupied, at least being on the roof and the balcony offers her some protection and shelter.
While I am on the subject of cats getting into the house, the other day on CBC radio they were saying that it was Isaac Newton who invented the cat flap on doors.  He cut two holes in his door, one for the cat and one for her kittens.  Later he discovered that the kittens always just followed the mother cat, so didn’t ever use their little door.

I paint, see my works at:  www.davidmarchant.ca