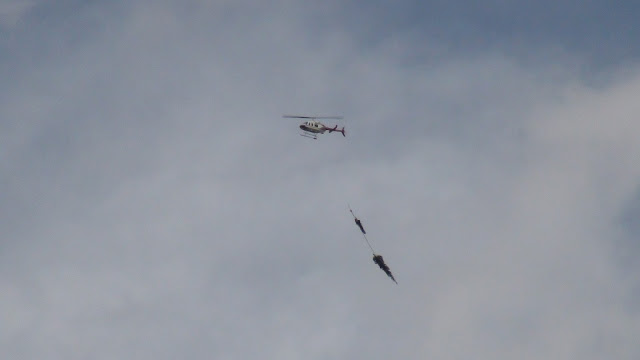 Do you remember my puzzlement over seeing a helicopter flying over hauling a tree?  Well, yesterday I found out what was going on.
One of the nice things about living in a small town, like McBride, is that if something happens, you eventually hear about it.  This happened to a Norma, a friend of mine, who had read my blog, and then one day when she was in the post office she heard a conversation about the helicopter.  She joined in and got an explanation which she passed on to me.  Here is the story.
As I have mentioned in previous blogs, the mountains that surround the Robson Valley are a very popular destination for snowmobilers.   Sometimes the snowmobiles break down way out in the middle of the mountains, or the snowmobilers go into areas where they can’t get out of with their machines.  Last winter, for whatever reason, a snowmobiler had to abandon his machine out in the middle of nowhere.  He decided to wait until spring to have it retrieved by a helicopter.
The helicopter flew him out to get the snowmobile, but when they found it, they discovered that other snowmobilers had stripped it of most of its key parts.  I guess there wasn’t a whole lot left of it, but there were a few bits that the owner decided he wanted, so they gathered up those parts and were going to fly them out.
The parts that the owner wanted to keep, didn’t weigh very much and if they hung it beneath the chopper, there was a possibility that it may get blown up into the rotors, so someone got the idea that if they hung something heavy, like a tree, below the collection of parts it would prevent the load from getting blown upwards.
So there you go, like the old radio broadcaster Paul Harvey always said, “Now you know the rest of the story.”