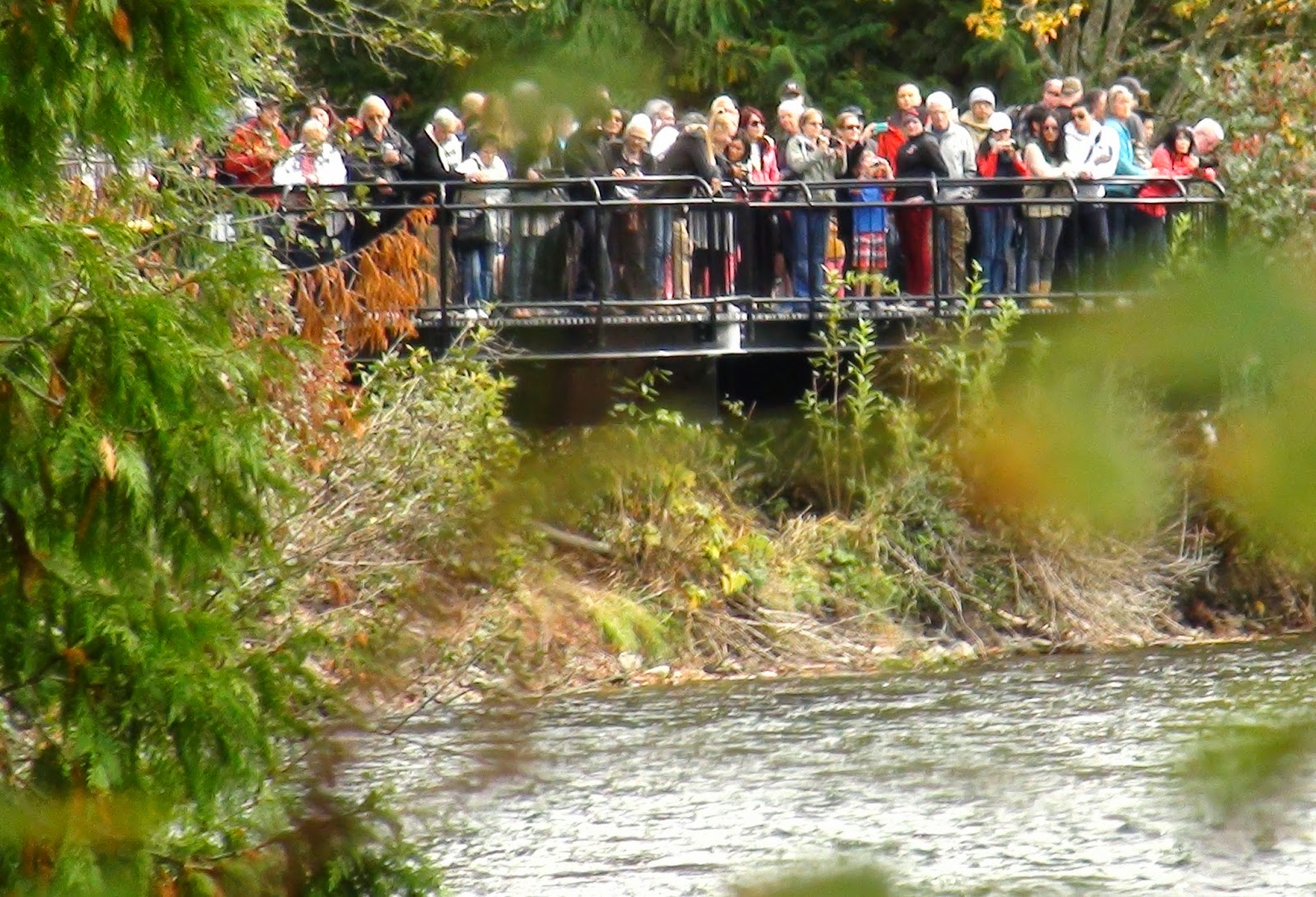 For years we have been hearing about the Adam’s River Salmon Run.  Every fall the salmon leave the ocean, after 4 years out in the Pacific, and start an epic swim up the rivers in BC to lay their eggs in the creeks and rivers of the interior of the province.   Then they die.  They swim hundreds of miles, against the currents, jumping waterfalls, fighting fast water, just to fulfill their destiny.
It is always a moving sight to see these huge fish, bodies, battered and torn, still splashing and swirling in shallow rivers, using up their last shreds of energy to spawn so that there is a next generation of salmon.
Salmon swim up the Fraser River.  They swim past our our property, after an 800 mile ordeal from the ocean.  We can see them in local rivers of the Robson Valley in late summer, but having heard so much about the Adam’s River Salmon Run, I thought it would be worth the 300 mile (482km) drive to see one of the world’s premier salmon runs, so yesterday, dark and early, Joan, Skye, and I climbed into the car and began our trip.
There wasn’t much traffic on the highways, all the way down to Kamloops.  We found a bit more traffic when we got on the Trans-Canada Highway heading toward the little town of Chase, BC.  Just east of Chase, we saw an exit sign “Exit for Roderick Haig-Brown Provincial Park, 6 km.”  That was our destination, so we exited onto the off ramp which climbed a short slope.  Once on top of the slope, we were surprised to be confronted with a long, long, line of cars, bumper to bumper, stretching as far as we could see, across the bridge that crossed over the Trans-Canada highway, and the Adams River and the road beyond.
“Surely, all these cars aren’t lined up for 6 km (3.7 miles),” we asked each other hopefully, but sadly they were.  We took our place within the lineup, and at a glacial pace proceeded toward the park.

Stop, and crawl forward.  Stop, and crawl forward.  After about a half an hour, we came upon a sign which told us that the park was 2 km ahead, by this time there were cars parked on the side of the road, not a good sign.  I noticed that there was a 50m space on the opposite side of the road where cars had not yet parked, by some signs that had a “P” for parking along with some arrows pointing in both directions.
“Should I or shouldn’t I?”
I did.   Next time there was a gap in the oncoming traffic, I left the slow creep forward and whipped the car around to the opposite direction, and parked in the empty space, along with a few other people.   We put Skye in her leash, grabbed our sun hats, and locked the car and started off, but then the oriental guy in the Mercedes SUV, who parked behind me, asked if we could park there.
I told him, “I guess so,” but then he said something about the signs.  I looked more closely at the “P” sign I had seen from across the road, and then noticed that there was a faded out circle with a slash over the “P’ meaning “No Parking” and the arrows showed where--right where I was parked.
Disgusted, we piled back into the car, now pointing in the wrong direction, took advantage of a kind person, who let us back into the long slow line heading to the park, and began our crawl again.
Cars were parked on both sides of the road, as we slowly made our way and eventually, made it to the park entrance, where we came upon a booth in front of a parking lot.  I was never so happy to hand over $5 before in my life--because along the edges of the parking lot, there were still empty spaces.
Once parked, we again strapped up Skye, got out of the car and joined the multitudes.  It was an unbelievably huge crowd.  I was surprised at how many oriental people there were, I would estimate 60%.  BC’s demographics are changing, but we don’t notice it in our little corner of the province.  There were people (and dogs) everywhere.  Skye was pretty freaked out by all the people and dogs, but managed to control her anxiety.

Before coming, in my imagination I saw a few other couples leisurely strolling along the trail that ran beside the salmon filled river, but in reality, there was a thick mob of humanity, moving slowly, making it difficult to even get to the edge of the river.     The viewing platform which I had heard about (top photo) was completely full, I gave up even trying to get to the front rails to look out over the Adams River.  A report I heard on the radio today said that “a quarter of a million people visit the park for the salmon run every year.”  It was unfortunate that this year they all decided to come on the same day we did. 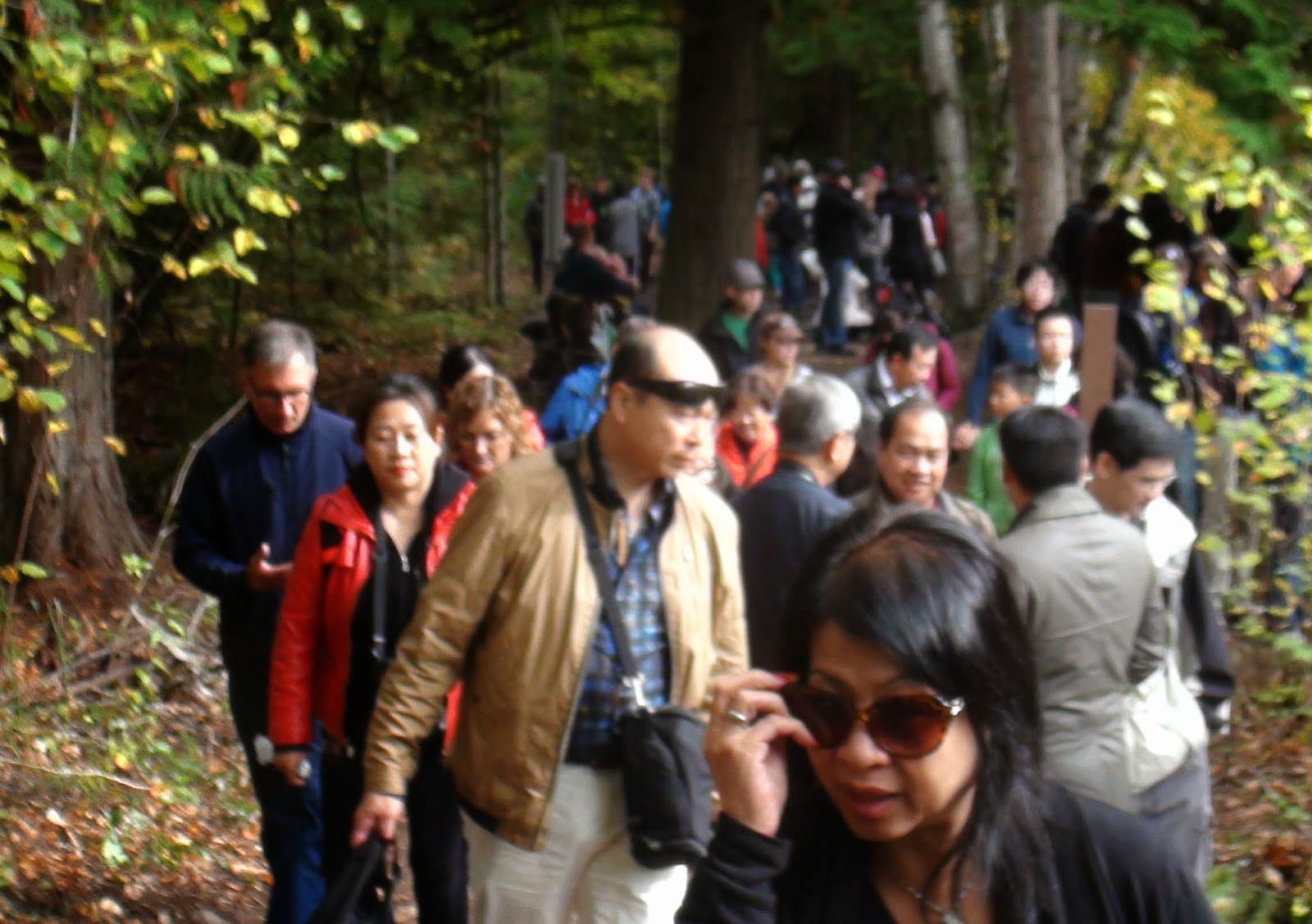 Tomorrow’s blog will actually show some salmon and not people. 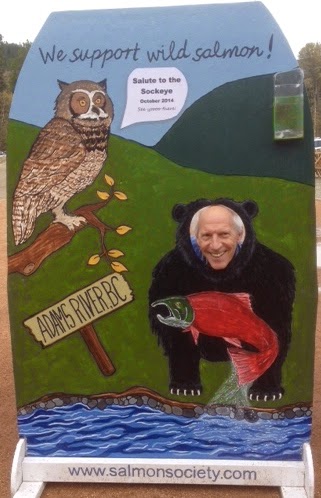