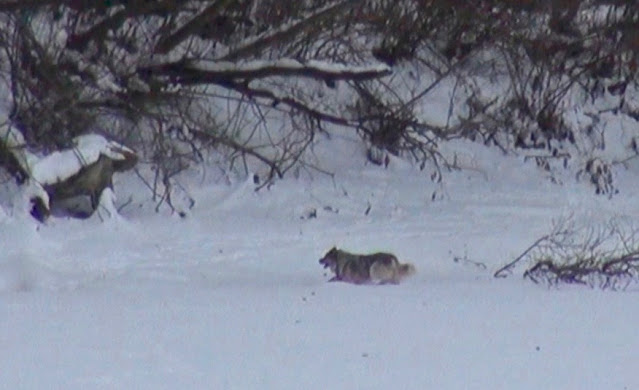 Several decades ago on a Sunday afternoon in February, I got a hankering to go up to the rock bluffs above our house.  There was a lot of snow on the ground and for some reason, which I no longer remember, I decided to use cross-country skis instead of snowshoes.  Snowshoes would have been a lot easier, because I had to go up the steep slope to get to the bluffs.

I had to do a lot of sideways steps with my skis up the slope to prevent myself from sliding backwards.  The whole climb was made more complicated because there was a lot of low brush that tangled with the long skis.

I eventually made it to the bluffs and made my along the base of the rock slide, below the bluffs,  exploring the topography.  As I was looking around, I suddenly noticed a wolf laying on the snow-covered, flat top of a big boulder.  It looked like a big, mostly black, German Shepherd, but it’s eyes were yellow.  It didn’t seem to be at all concerned with my presence, it even got up on its forelegs, stretched, and yawned, but it kept its eyes on me, like I was keeping my eyes on it.

I wasn’t really afraid being all alone in an isolated situation with the wolf, but I was wary and a little spooked, so after we watched each other for a time, I started backing away, until I had lost sight of the wolf, then started working my way back down the slope.  I did frequently turn my head around to see if it was following me, but it wasn’t.

Unfortunately, I didn’t have a camera along and so I didn’t get a photo.  I took the photo above in 2014, when I spotted a wolf on the edge of the Fraser River.  There are not that many wolves around, so I rarely see them, but I was sure happy to experience that black yellow-eyed one up by the bluffs.