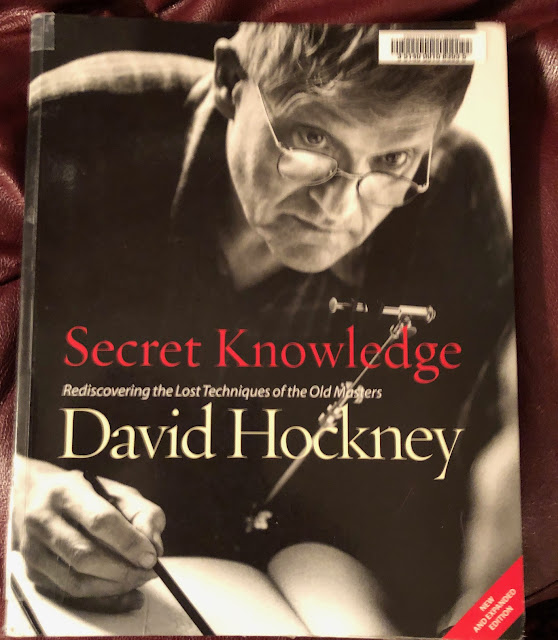 I enjoy painting every day.  I like realism and strive to make the images I paint look like they actually are.  My paintings are based on photographs that I have taken.  To accurately paint the image, I import it into my computer then make a grid over the image.  I draw another grid on my canvas.  I used the grid lines as guides, so that I can draw the image on the canvas, carefully noting where the lines I draw, fall when crossing the gird lines.  That is how I get everything on the painting in the right place.

I guess you could call using a grid my painting secret, although I have never hesitated in tell people how I paint so accurately, when they ask.

David Hockney, a renowned artist who lives in Great Britain, became aware of something that peaked his interest.  He noticed that before the year 1430 paintings were pretty flat looking, then suddenly after 1430, paintings became a lot more realistic, with more dark shadows and depth.  It occurred to him that 1430 was the year when glass lens and mirrors started to spread through Europe.  He began to do some research the subject and gathered a lot of evidence that the Old Masters began to secretly use optical devices to make their paintings more realistic.

Hockney experimented with something called a camera obscura.  It is basically just a confined dark space with a tiny hole on the side that projects an image of whatever is on the other side of the hole, onto the opposite surface of the dark space.  The image is projected upside down.  With a lens in the hole, the projected image becomes much sharper and distinct.  Access to small concave mirrors make the image even more distinct.  To get a really sharp projected image, you need the light outside the camera obscura to be very bright, thus producing a lot of shadows on the projected subject.  Later paintings had more intense areas of light and dark.

Hockney began to do an intensive study of the paintings after 1430 and began to see evidence that his theory was correct.  Because the projected image could not be very large, painters would project a bit of what they wanted to paint, sketch that out, then move the lens to paint another section, then paint that spot.  Moving the lens created small differences in the projected image, so by studying the whole final product Hockney could see how they were made.

He found that sometimes the painted faces where too big or too small for the bodies.  Sometimes there were more than one perspective vanishing point.  He noticed that objects close to the viewer were sometimes blurry, while more distant things were sharp.  This is something that occurs with a lens, and is different when you are looking with your eyes, because when you are looking at something close, your eyes focus on it making it sharp.

Hockney found that many of the subjects where holding things in their left hand, while in actuality, most people are right handed.  This would suggest that a lens was used.  A lot of paintings had no underlying sketches, just the paint.  This was something that is very unusual and normally doesn’t occur in realistic paintings.  Post-1340 paintings suddenly had a lot of shadows and dark areas compared to all of the earlier paintings.  This was due to the very bright light needed to project an image.

Most people think that using some optical device somehow lessens the greatness of an artist, but just having an image projected only allows a painter to put everything in the correct place, the actual painting still takes an enormous amount of skill and time.

Famous painters like Vermeer, Caravagio, and Rembrandt had to be extremely talented, even if they used optical devices to turn out the masterpieces they are famous for.

Making a living by painting was a very difficult and competitive profession, so painters hid their secrets from the competition.  There is some written evidence of painters using optical devices, but very little.  Vermeer’s neighbor was a lens maker.

Secret Knowledge was a fascinating book to read.  I was eager to read it after seeing the documentary, Tim’s Vermeer.  It is a film about an engineer who had read the book, then decided to paint a copy of one of Vermeer’s famous paintings, even though he wasn’t an artist.  He built a room, exactly like that in Vermeer’s painting, dressed models in costumes like the subjects in Vermeer’s painting, then using lenses and a mirror, was able to copy, almost exactly, Vermeer’s painting.

Below is a photo showing an example of a painting before 1430 (on the left) and how paintings started changed after 1430 (on the right). 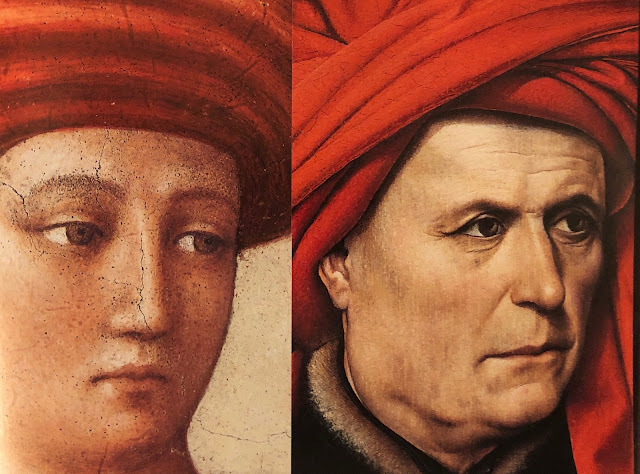 You can view my paintings at:  davidmarchant2.ca
Posted by Life in BC's Robson Valley at 09:26