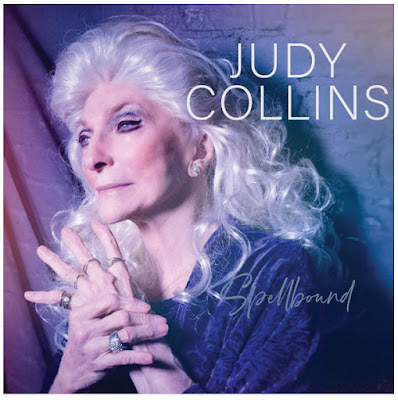 During my first year at university I discovered that in the Student Union building, there was what was called, “The Music Listening Room”.  Students could come in, check out records, and then play them.  They had a copy of Judy Collins’ first album, and I listened to it over and over.

Several years later folk singer Collins had a breakthrough into the pop charts with her cover of Joni Mitchell’s “Both Sides Now” and later “Send In The Clowns.”   By that time I had listened to many of her albums, and discovered that not only was she an extraordinary singer, but also a talented singer-songwriter.  I was not her only big fan, Crosby, Stills, and Nash wrote the song, “Suite Judy Blue Eyes” about Judy Collins.

Over the last 50 years, I have listened to the many albums that Judy Collins had put out, but I have always loved the ones before 1980 the best.

I saw recently that Judy Collins had just released an album called “Spellbound” which featured just songs that she had written.  I downloaded the album and began listening to it every morning as I paint my daily square.  It is now on heavy rotation on my computer.  It is a great collection of songs that she has written as she looked back at her life.

So many long-time performers have continued to sing, even though their voices have deteriorated , but that is not the case with 80 year old Collins.  Her voice is a clear and beautiful as that first time I heard it on Hootenanny.  Her songs are nostalgic as she recalls the many places (Colorado, Hawaii, New York, Arizona) where she remembers her experiences.  The haunting songs are done with melodic piano runs.  It is a beautiful collection of work.

While I find myself humming several of her songs from the album, my favorite song is “When I Was A Girl In Colorado”.  I gives me shivers every time I hear it.  You can listen to the song while reading the lyrics at this link: